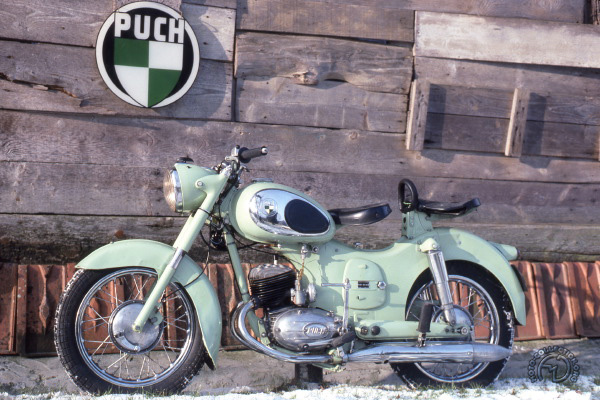 Firing on every second stroke, the two-stroke is twice as efficient as the four-stroke and simpler to manufacture. It needs no intake and exhaust valves. The intake of the fuel/oil mixture and the evacuation of the burnt gases are governed by the piston, which compresses the fresh gas in the crankcase and then uncovers the transfer port, admitting the gas burnt to the combustion chamber.

Simple in Theory, Complex in Practice

The principal is simple but works less well in practice. The burnt gases are not completely expelled from the cylinder and the engine does not perform well at certain speeds. Modern two-strokes solve these problems by incorporating such complex methods of controlling the exhaust with rotary valves.

Up From the Ashes

In the past, one of the most effective ways of preventing fresh and burnt gases from mingling was to use two cylinders with a common combustion chamber. This method, used in the interwar years by DKW in Germany and Puch in Austria, gave a fuel consumption approaching that of a four-stroke while preserving the responsiveness associated with two-strokes. The Puch factories were badly damaged by Allied bombing during the War, but Puch was back in production as early as 1946. A new range of "split-single" two-strokes appeared in 1951, with pressed-steel frames and telescopic forks. Though costly, they sold well until the early 1960s. The 175 SV, launched at the 1953 Geneva Salon, was the first with the fashionable 16 inch wheels.