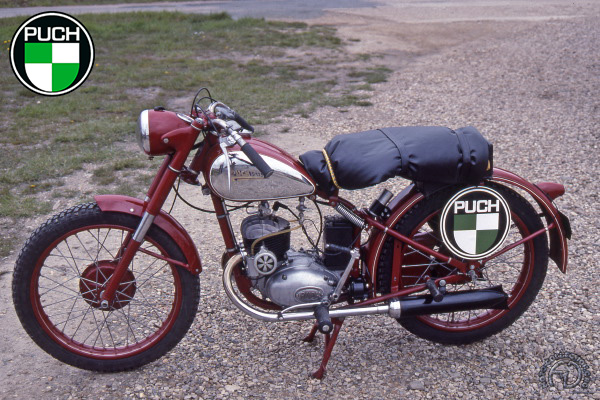 Over a 40-year period, Georges Monneret made headlines around the world. His career began in 1926, when he was 17, and he was still breaking records in the early 1970s. Duling that time, he amassed an amazing list of successes Ā– over 100 world records plus many track victories with works machines, most notably winning the French championship eight times.

Monneret was a skilled publicist, whether for serious record attempts or for publicity stunts;. He never ceased taking part in the most spectacular challenges, like the time he crossed the English Channel on a Vespa scooter fitted with floats (Monneret couldn't swim!). His last records were set in 1971, when he averaged 32.3 mph for 24 hours on a 50cc Peugeot.

Around the World in 24 Days

In 1951, Monneret and his twin sons Jean and Pierre set off to run 24 days and nights on the banked Montlhéry circuit, equivalent to nearly 25,000 miles Ā– or once round the world! Ā– covered at an average 48.5 mph on a double-piston Puch 125 TS, beating nine world records in the process. They fought boredom by inventing fictitious stages on their long journey Ā– "We've passed Cape Verde ... we're approaching Seoul." But there were still difficulties. Jean Monneret collided with the truck taking hurricane lamps round the track and set himself on fire, suffering burns and fractures, though the Puch kept on running to the end.

The "Round the WorldĀ” Puch was virtually standard. The Monnerets rode lying down; they removed the kickstart, set the gear selector vertically and changed gears by hand.