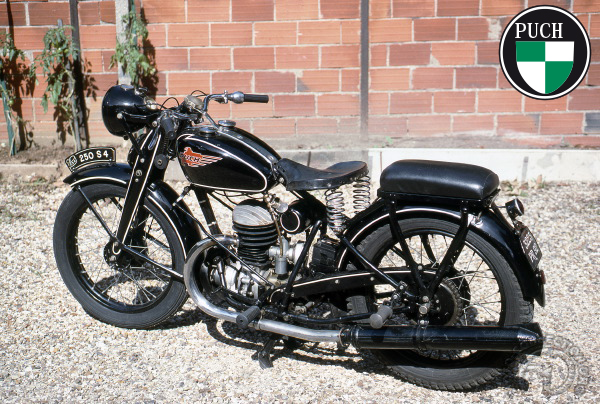 The Puch S4 (for "Sport 4 speeds") was a direct descendant of the marque's first 250, with the double-piston and longitudinal crankshaft. The base model, presented for the first time in its touring version at the Vienna Spring Fair in 1928, was quickly joined by a sports model with a bronze cylinder head. It developed 7 hp at 3200 rpm but still only had a three-speed box with tank-shift. In 1931, its power increased to 9 hp and the cylinders took on a curious aspect, with every other cooling fin increased in size.

The SL model appeared in 1933. It developed 10.5 hp at 4100 rpm and adopted a four-speed gearbox. It was the forerunner of the S4, officially launched in 1934 and constantly improved upon until 1942. Modern in concept with separate lubrication, the S4 had an unorthodox transmission, with a bevel gear acting as primary drive and a clutch incorporated in the rear hub. The chain revolved even with the clutch out.

From the Army to the ISDT

The S4 was very popular as an army patrol bike during WWII. It also won its spurs in off-road events, revealing itself as one of the most sporty machines of its day in the Austro-German region for endurance races in the Alps and even in the ISDT. Its most famous riders were Siegfried Cmyral of Graz, Hans Wall and the Beranek brothers from Vienna. The works prepared for them special versions of the S4, with a power rating that was estimated at 13 to 14 hp, which enjoyed many successes in hill-climbing events.

The 1935 version of the Puch 54 (main photo) had a handsome fishtail muffler, and the 1936 model (inset) had a revised color scheme.