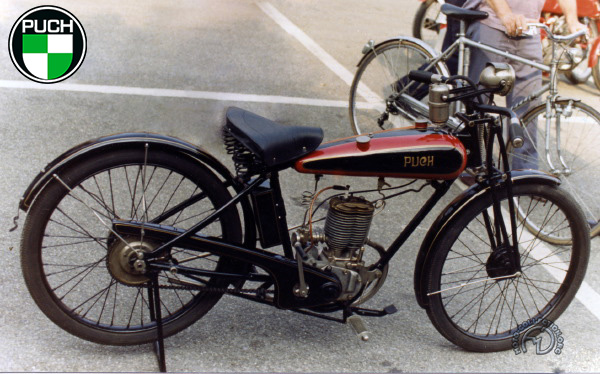 The Graz-based firm returned to production after WWI in 1923, with an entirely new engine whose twin cylinders were mounted in tandem with a shared combustion chamber and a single forked connecting rod between the two pistons. This configuration was first seen in the 125cc LM, of which 2500 examples were built between 1923 and 1927.

Puch followed with the Model 175, with the power up from 2 to 3 hp and a top speed of 40 mph. It performed well in mountainous regions and was sold at a very affordable price compared with its rivals. Between 1925 and 1927, Puch sold 3500 of the new model. The little Puch became known as the "Harlette" (Little Harley") because of the fancied resemblance of its longintudinally-divided gas tank to that of the famous American bike.

Without delay, Puch introduced a larger-engined model, the Type 220, which developed 4.5 hp, while the 175 also appeared in a sport version with a bronze cylinder head and dual exhaust pipes. It had a lever-operated, two-speed gear and clutch in the rear hub, so that the driving chain continued to tum as long as the engine was running, even when the bike was at a standstill. The 175 Sport enjoyed many sports successes, not only in Austria, but also in Germany, Switzerland and Italy. Umberto Faraglia won the 175cc class of the world-famous Targa Florio and the Italian Championship with a 175 Sport. In Austria the riders in the Puch works team were HĂ¶bel, Sandler and Runtsch, who won the 1926 Austrian TT with this 175 Sport.

Modern in appearance, with its little 1.9 gallon saddle tank, this lively 175 created the international image of the Puch marque after WWl.