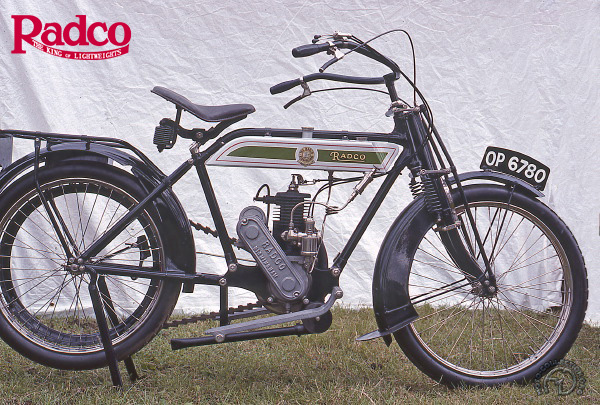 The Radco lightweight appeared in 1914, and the model illustrated dates from 1922, the last year of its production. Even then it showed its age by its agricultural design, with direct belt drive to the rear wheel without a clutch or gearbox. The equivalent of today's single-speed mopeds, such bikes were popular in the 1920s as the least expensive form of motorized transport.

The Radco Company was founded in 1913 by E.A. Radnall. Typical of many small marques based in Birmingham, it built nothing but lightweights with two-stroke engines.

The 247cc two-stroke single fitted to this model had a heavy external flywheel that carried the transmission pulley on its inner face. The first version had a 211cc power unit. After WWI, Radco brought out a deluxe version with a longer and lower frame, a separate Burman three-speed gearbox, a clutch and a chain transmission. Despite its lack of power, this 247cc model was also available with a sidecar. Engine lubrication was not by mixing oil with the gasoline, but by a hand pump on the side of the fuel tank. As on old-time four-strokes, the pump had to be used in accordance with road conditions (more oil on hills, less on the flat) to prevent the piston from seizing because of lack of lubricant.

While this Radco was an obsolete design by 1922, its manufacturers, by continuing to list it in their catalogue, were able to offer one of the cheapest bikes on the British market.