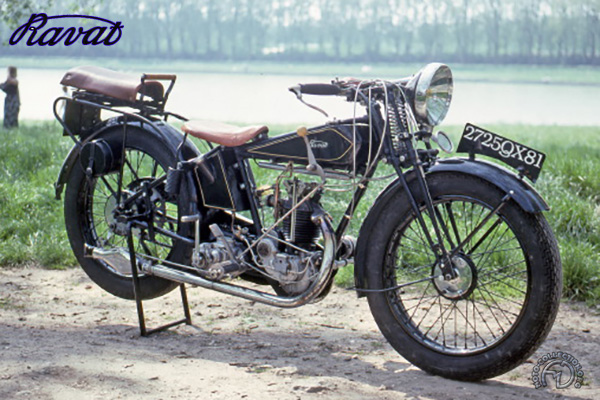 An assembler of quality

During the 1920s and 1930s, France Â– like Great Britain Â– boasted dozens of specialist components makers. Without their engines, gearboxes, carburetors, lighting sets, brakes and other components, many small marques would never have seen the light of day.

Ravat was typical of those little firms, whose products were an assemblage of bought-in components. The company was based in the industrial town (armaments, sewing machines and cycles) of St. Etienne.

Ravat started in the cycle industry and ventured into powered two-wheelers in 1922 and 1923 with a 125cc autocycle. True motorcycles of 175 to 350cc appeared around 1925. Unusually, the 175 and 250cc had two-stroke engines of Ravat's own make. The firm's four-stroke models used the famed overhead-valve engines built by ZĂĽrcher in its factory at Ia Ferriere in Eastern France, near the border of Ernest ZĂĽrcherÂ’s native Switzerland. ZĂĽrcher engines were all ohv units and thus regarded as being rather "sporty." For 1926 and 1927, Ravat offered Â– apart from the 175cc two-stroke BS4 and BT6 models Â– the little 175, 250 and 350cc CS6 and FSS6, all fitted with ZĂĽrcher engines. According to the firm's publicity, the gearbox was "made by Ravat and inspired by the finest British boxes," though it was actually supplied by Magnat-Debon. Mindful of the market for plodding side-valves, Ravat also offered the FT8 and HA, 350 and 500cc models powered by British-made Blackburne engines.

The Ravat ESS6 was typical of late-1920s design. The tiny muffler is worthy of note, as is the little round container beside the rear mudguard containing a spare inner tube.