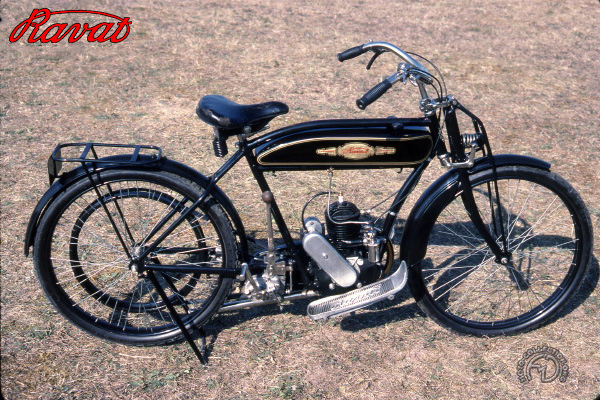 Capacity : 175
Model : B2 belt drive
Production : 1926 -
Category : (R) Route
From the Wonder sewing machine to the motorcycle
If one believe its technical-advertising documents, the Saint-Etienne firm founded by Jules Ravat in 1989 occupies, in the mid-twenties, 20 000 m2 and employs 1,200 workers. Wonder and Ravat bicycles, Ravat motorcycles, and ... Wonder sewing machines and skimmers are produced here.
Modest debut
Until then in the bike, Ravat launches into the two-wheeled motorized with a modest moped of 125 cm3, in 1922 presumably, engine Massardier, other firm Etienne. It should be noted that St. Étienne is one of the largest French cycling and motorcycling centers, not to mention weapons: both wheels are manufactured, as well as parts and other components. Some houses also provided "series", understand by that complete machines supplied to firms more or less "ghosts".
Builder and assembler
The 125 cm3 Massardier is a little weak. Ravat abandoned it around 1925 and produced its own engine: a modern two-stroke 175cc engine with a detachable bolt and a two-speed Picard or Campbell box. Soberly enamelled in black embellished with gold nets, a presentation could not be more classic at this time, the Ravat is hardly distinguishable from his contemporaries. In 1927, this moped was supported by another three-speed 175cc, while the Z?rcher four-stroke, 175, 250 and 350cc engine satisfied true motorcyclists.
Air-cooled 2-stroke - vertical single cylinder - 175 cm3 (59 x 64 mm) - Mixed lubrication - Magneto ignition - 2-speed gearbox - Primary transmissions by chain, secondary by belt -  Kick start - Single frame cradle - Front fork elastic Munro style, rear rigid - Rear brake on pulley-rim - Tires 650 x 55 - 50 kg - 60 km / h.
Fine and pleasant lines, the light motorcycle Ravat hardly comes out of anonymity, even with its beautiful footrest wagon in the name of the brand.