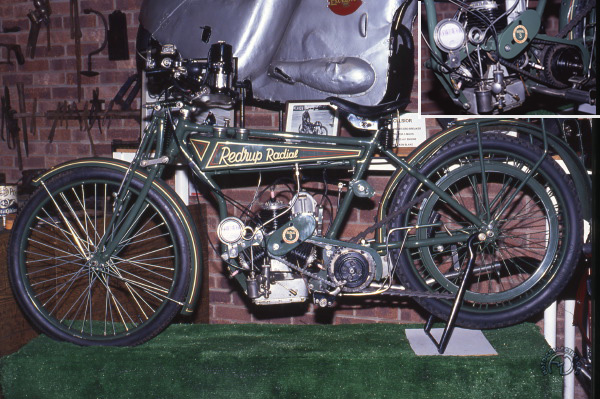 Just after WWI, the lack of demand for new aircraft grounded many aviation specialists.

Among them was the Briton Charles Redrup, who had been working on radial engines since 1903. Around 1912, he had devised a rotary three-cylinder motorcycle engine that

drove the rear wheel through two shafts, one linked to the crankcase and the other to the crankshaft, which rotated in the opposite direction. After the Armistice, Redrup resurfaced at Burmantoft, near Leeds, in partnership with a man named Boyle.

Charles Redrup's three-cylinder engine was now a fixed radial; it was modern by 1919 standards of motorcycle design, with pressure lubrication, fully-enclosed valve gear and

But Redrup's highly-personalized aesthetics and odd-ball power unit failed to advance his career, whereas other aviation engine makers like BMW and Gnome-RhĂŽne prospered when they turned to motorcycle manufacturing. Redrup even built a six-cylinder motorcycle engine by coupling two of his radial threes side-by-side. He had vanished from the scene by 1922. Three-cylinder radials have never been common: the layout next appeared on the British-built Eta of 1921 (which had its engine set across the frame and a longitudinal crankshaft, airplane fashion). The German Pax designed in 1922 by Fritz Cockerell had a three-cylinder engine in the rear wheel. Cockerell subsequently created the Megola (which had a five-cylinder rotary built into the front wheel!).

Redrup's aim of adapting aviation techniques to motorcycle construction was a noble one, but be fatally ignored the aesthetic aspect; only three Redrup Radials were built and this one, is visible in the Sammy Miller Museum