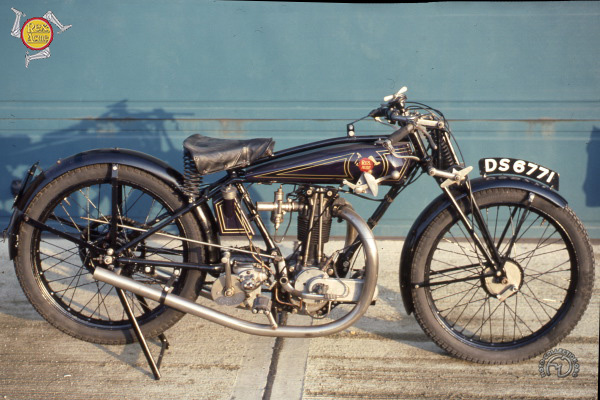 A great name from Coventry

Rex built its first motorcycle in 1900, and soon became one of the major English manufacturers. In 1922, Rex took over the next-door Coventry Acme factory, became Rex-Acme and halted manufacture of its own make engines in favor of JAP and Barr & Stroud (sleeve-valve) power units for tourers and Blackburne engines for sports and racing models.

Two Tourist Trophies in a Week

The first Rex-Acme racer had a 250 Blackburne engine; with it, 19-year-old Wal Handley won the Belgian and Ulster Grands Prix in 1923. A similar 350 appeared in 1925, and Handley became the first rider to win two TT races in a week, taking the Junior (350) event at a record average of 65.02 mph and the Ultra-Lightweight (175) at 53.54 mph; both machines were Rex-Acmes. To celebrate the unique double win, Rex-Acme incorporated the ancient three-legged "Triskelion" symbol of the Isle of Man into its badge.

Lost in the Last Lap

In 1926, Handley rode Rex-Acmes in three TT races; he retired in the Lightweight (250) but finished third in the Junior (350) and second in the Senior (500) with a new Blackburne V-twin engine using two cylinders from the ohv 250 unit. Handley won his last TT victory for Rex-Acme in the Lightweight event in 1927. In the Junior TT, he led the race right up to the last lap, when an engine seizure cost him the event, with only a 69.18 mph record lap as consolation. In its 1926 version, the long-stroke Blackburne 350 single was fitted with a twin-port head and two impressive large-diameter tailpipes: in 1927, a single-port head was used.