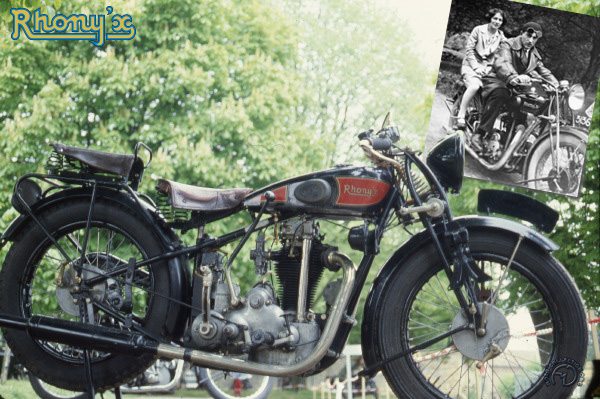 The Rhony'x marque was given its name because its factory at Lyon was close to the River RhĂ´ne. Founded in 1924, the company assembled a wide range of machines, making its own frames and fitting them with such power units as LMP, Stainless and Chaise.

In 1930, the company offered a large ten-model range, from 185 and 247cc two-strokes to 350 and 500 four-strokes with overhead- or side-valves. The engines used were mainly British JAP or French Chaise units, the latter being fitted in the 350 and 500cc top-of-the-range overhead-camshaft models.

The unit-construction Chaise engine, unveiled on the Rhony'x stand at the 1929 Paris Salon, was a magnificent piece of workmanship. Unit-construction engines were not all that common, nor were overhead-camshafts and forced-pressure lubrication. The available performance from the 500 GX was modest in view of the high price demanded: $243 in 1929 was $36 more than the 350cc Terrot and that at a time when a new Model A Ford Roadster cost $450! The Chaise engine was supplied by a factory founded by Henri Chaise, former head of manufacturing at Gnome & RhĂ´ne (1907 to 1921). The company initially specialized in little two-stroke engines. But in 1927, it launched unit-construction, overhead-camshaft four-strokes of 350 and 500cc. A unit-construction, overhead-valve 250cc then formed the basis of a new range right up to a 500cc single, sold in parallel with the overhead-cam engines.

Like other marques in the 1930s-Automoto and Majestic in France and La Mondiale in Belgium Â– Rhony'x fitted its bikes with Chaise engines.