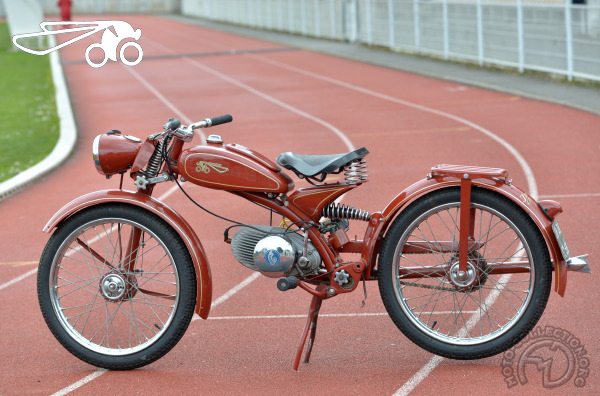 A work of genius

Motorcycles are normally a complex assembly of tubes and other elements. By what miracle did the German engineer Norbert Riedel, who founded the Imme company at Immenstadt in 1949, succeed in making his first production model so simple? The name of the miracle is ‑ genius.

Throwing convention to the winds, Norbert Riedel created one of the most ingenious motorcycles of all time. A single-curved large-section tube with a massive steering head at its front end formed the backbone frame. The front suspension consisted of a parallelogram-sprung tubular leg like the landing gear of an aircraft.

The rear suspension was also a single arm unit, but even more sophisticated. The swing arm was extended ahead of its pivot to support the engine Ā– and also acted as the tailpipe. This arm pressed against a spring fixed to the frame; a friction damper was incorporated in its pivot, whose offset mounting kept a constant chain tension. Mounted on stub axles, as on an automobile, the wheels were quickly detachable and interchangeable. The oval power egg was a two-stroke with a one-bearing overhung crank. A 150 twin version came later but was not a success. Advanced as it was, the Imme marque was only in production from 1949 to 1953. Riedel lost his life in a skiing accident at the age of 50 in the early 1960s.