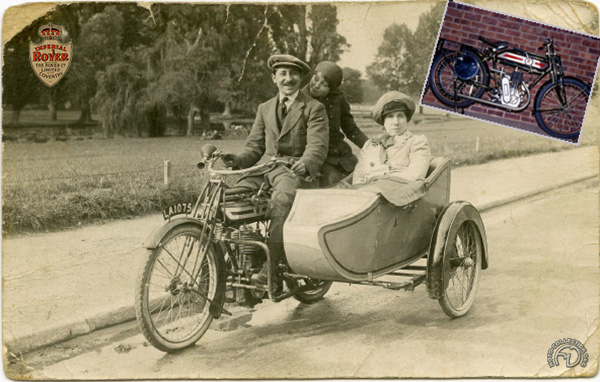 Best known as an engine maker, Rover was a pioneer of the cycle industry in the 1880s and once was a well-known manufacturer of motorcycles, building its first in 1902 and the last in 1925.

The firm rapidly became famous for its quality and reliability. In 1913, Rover developed a 500cc side-valve machine with an own-make engine, entering a team in the Isle of Man TT. But the works machines already had an oddly dated air, with a high saddle position inherited from the pedal bicycles, and the standard model still used direct-belt drive from the crankshaft pulley and the rear wheel, without a clutch or gearbox.

Insurmountable Handicap Realizing that this would be a huge handicap in the TT, Rover fitted its racing bikes with the Philipson pulley, a kind of rudimentary clutch with moveable cheeks that could be moved apart to allow the belt to slip or closed to give a higher drive ratio. Rover's participation in the TT was intended to demonstrate the reliability of the standard production machine rather than to win big-money prizes. It was very successful in this respect, since the three Rovers entered finished in 15th, 19th and 28th places. The cast-iron pistons were lightened by holes made with a hand drill. The lack of a gearbox was a grave handicap in the struggle with the more advanced Scott, Indian, Sunbeam and Rudge machines.

Rover's entry in the Tourist Trophy race was a bold attempt to prove that its production machines could perform well in competition.