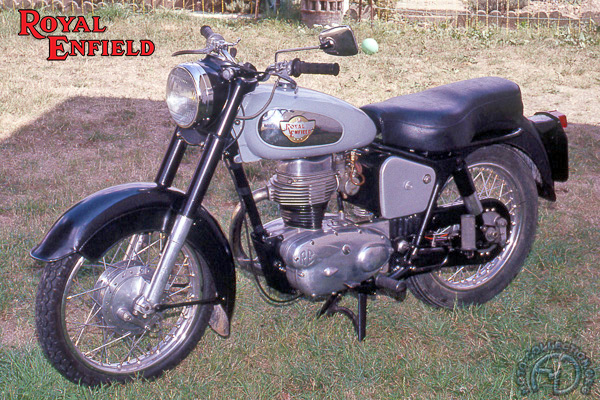 A dash of Worcestershire sauce

British motorcycle enthusiasts have fond memories of the Royal Enfield Meteor, Constellation and Interceptor twins of the 1950s and '60s. The 250cc machines headed the sales charts in Great Britain. The old established firm from Worcestershire earned the larger part of its income from its excellent quarter-liter models.

Royal Enfield's first postwar 250 in 1949 had a telescopic front fork. In 1954 the company introduced the Clipper, which retained the same engine with cast-iron cylinder and head but replaced the rigid frame with a modern swinging-fork rear suspension. The Crusader of 1956 was a revolution: It had the rounded contours, but the long-stroke (64x77mm) engine was transformed into an over-square (70x64.5mm) unit.

Though such a bore/stroke ratio was rare on British bikes, it was nothing new to Royal Enfield. The engine was unit-constructed, with separate compartments housing the stout one-piece crankshafts gearbox, chain drive and alternator. A touring version of the Crusader appeared, with large pressed-steel leg-protectors. In 1958 the Sport acquired a light-alloy cylinder head plus high-compression pistons; this was followed in 1962 by a five-speed gearbox and a leading-link front fork In parallel, the GT became the Crusader Airflow in 1958, with a plastic fairing. The Crusader was replaced by the Continental GT in 1962; it had the remarkable power output of 25 hp with speed of 82 mph.

Despite its sporty appearance, the Crusader was a prosaic performer; it was not until 1962 that a high-performance Royal Enfield 250 made its debut.