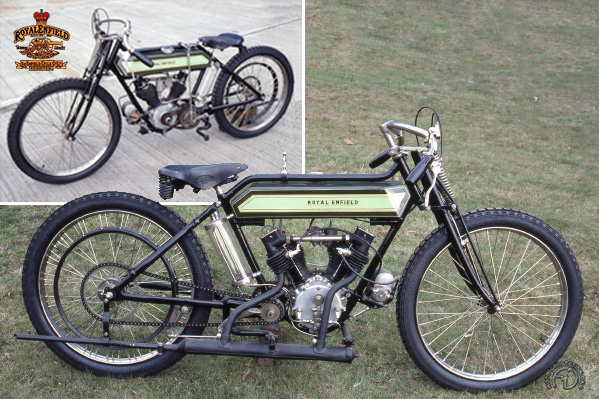 Eight racers for the Tourist Trophy

Enfield first went racing at Brooklands and the Isle of Man in 1911, this was with the Swiss MAG/Motosacoche engine, which was 344cc (2 3/4hp). This was the standard size of the MAG engine at this time (in 1910, when Enfield first used the little v engine, it was only 297cc). The MAG engine was side valve inlet and exhaust, and did not change from this right up to 1914, when Enfield dropped the 344cc/2 3/4hp model 160 from their range.

In the early part of 1912, Enfield developed their own v twin of 344cc (same bore and stroke as the MAG). This engine has the "F" valve arrangement and Enfield used it at Brooklands that year, but they didn't enter the IoM TT. In 1913, Royal Enfield brought out the 425cc/3hp v twin in a new lowered frame with glass oil tank, which was also "F" valve configuration, and it was basically a bored out version of the 345cc engine.

This dry sump, recirculating oil system was ONLY used on Enfield's own engine (nothing to do with MAG, although Guillon was Swiss, living in the UK at that time).

In 1913 and 1914 Enfield used the 345cc bikes in the Junior TT with the lowered frame and glass oil tank. Eight bikes were at the start in 1914. The highest-placed, who finished third, was ridden by F.J. Walker. He was so intent on squeezing the last ounce of performance out of his machine that he crossed the line head down, smashed into the barrier set up to halt the racers at the end of their final lap and was fatally injured. Six of the other Royal Enfields finished the 187-mile race, a remarkable record of reliability on the world 's most demanding race circuit.

The 344cc and 425cc Royal Enfield inlet over exhaust engines were their own manufacture, designed by WH Guillon, who worked for Enfield at that time, returning to Switzerland when war broke out. The 345cc prototype was tested/developed on the Brooklands track by HV (Bert) Colver who rode for Enfield 1911-1913. One of its unique features was dry-sump lubrication, among the first such installation on a motorcycle. This thoroughly modern installation used a gear pump to force the oil from the crank pin along the connecting rod to the wrist pin. Then the oil was returned from the crank chamber to a cylindrical glass tank fixed to the saddle tube Â– and all this at a time when most motorcycles were still fitted with a hand pump and total-loss oiling. The F-head V-twin first appeared in 1913 in 425cc form which enter very few races, contrary to the smaller model, intended for the popular 350cc category. Its primary transmission by twin chains gave two speeds, which were clutched in by turning a vertical crank-handle on the left of the tank. This elegant machine was far ahead of its time.

One of the best-looking racing bikes of 1914, the 350cc Royal Enfield was ahead of its time  in having dry-sump lubrication.