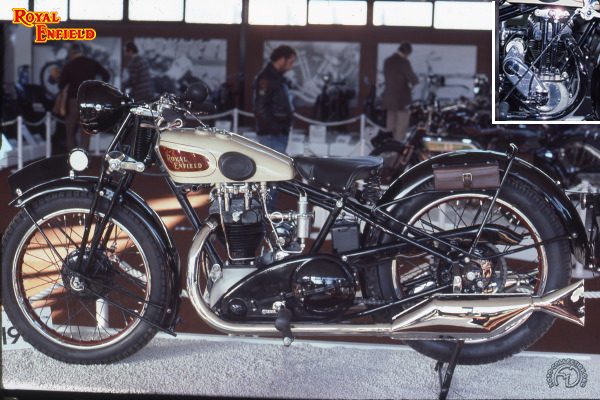 A diversity of bikes

Famed for almost 70 years, the Royal Enfield works at Redditch, near Birmingham in the English Midlands, built a wide diversity of bikes. Until the early 1930s, the company was a regular competitor in the Isle of Man TT but achieved its success in this event with brought-in engines Â– initially the Swiss Motosacoche, then the London-built JAP.

Its first 500 was launched in 1927 and was a side-valve unit with dimensions of 85.5x85mm (488cc). It was joined in 1929 by an overhead-valve model with a highly-fashionable twin exhaust port head with large-diameter downpipe and sporty-looking muffler on either side to balance the machine. The engine was fitted in a productionized version of the frame developed for the JAP-engined Tourist Trophy machines. This frame had two superimposed top tubes. The engine retained a strong JAP look, with its vertical pushrods and its external oil pump. A compartment in the fuel tank contained the oil, which fed by gravity to the pump mounted on the right side of the crankcase. Enfield was ahead of its time in fitting a four-speed gearbox, for most of its rivals only had three speeds, even though it still had the lever on the tank. A four-valve sports model with foot-shift came in 1932.

This robust touring machine is powered by the first 500cc engine built by Royal Enfield, heavily inspired by the JAP unit previously used.