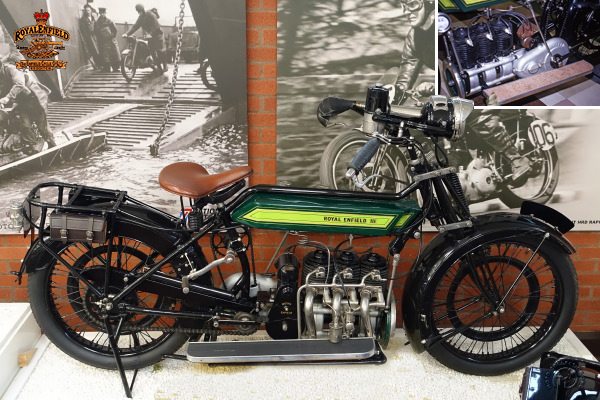 Right until the disappearance of the marque in 1967, the singles and twins made by Royal Enfield included many legendary classics, but the Redditch marque also had more original ambitions. At the end of WWI, it ventured into three and four cylinders.

The first Royal Enfield worth noticing was a 350cc powered by an MAG four-stroke twin, launched in 1910. It was followed by a heavy V-twin JAP-powered sidecar bike. But in 1914, the firm created a surprise by putting a lightweight 225cc two-stroke on the market.

Royal Enfield also wanted to move into larger displacements with an own-make multi-cylinder and its research department built two astounding prototypes Ā– an inline 675cc three-cylinder two-stroke and a 846cc four-cylinder four-stroke. The three-cylinder bike, built in 1918, came first. It was a rough-and-ready mock-up built solely for test purposes and used three 225cc engines coupled end-to-end, each retaining its original crankcase, cylinders and heads. The external flywheel was at the front. A fourth little casing housed tl1e bevel drive for the primary chain and the chain drives for the magneto and starting handle. Neither of these two prototypes went into production, and Royal Enfield went back to more conventional designs.

The 1918 three-cylinder Royal Enfield was unique in its day. It had a starting handle under the saddle linked to the gearbox by chain.