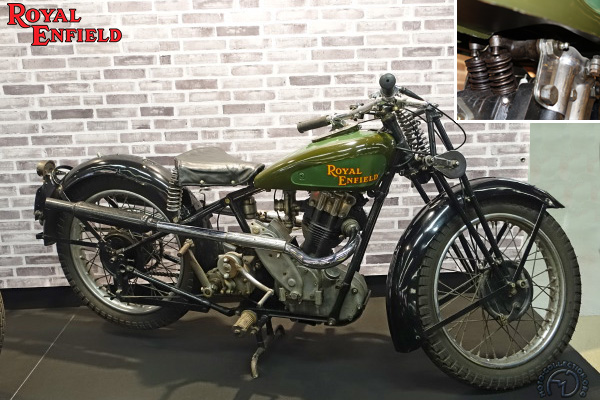 Founder of a long line

As the world began to recover from the effects of the Wall Street Crash of 1929 and the Depression, the demand for high-performance sports bikes began to intensify. Profiting from the new spirit of optimism, the British marque Royal Enfield offered its 500 LF Special in late 1932. This bike inaugurated the famous range of Royal Enfield Bullet sports models.

The 500 LF Special was powered by a single-overhead-cam engine with virtually-square bore and stroke measurements of 85.5x85mm giving a displacement of 488cc. These engine dimensions had been used by the Redditch-based company since 1927. But unlike the earlier models, the new unit had four valves and the pushrods ran in tunnels cast into the cylinder and head. The engine had a single carburetor but twin exhausts to conform with the current fashion.

Royal Enfield entered a specially-prepared bike in the 1934 Isle of Man Senior Tourist Trophy. This model had an automobile-type big-end that turned about a floating duralumin sleeve rather than needle-rollers or white-metal bearings. The bike was ridden by famed trialist Jack Stocker, who later became the sales director of the firm. Stocker crashed on the fourth lap. Royal Enfield later adopted this type of big-end on all its four-stroke models.

Racing in the 1993 Klausenrennen Retrospective, the bike pictured is believed to be the actual Royal Enfield works racer ridden in the 1934 TT by Jack Stocker.