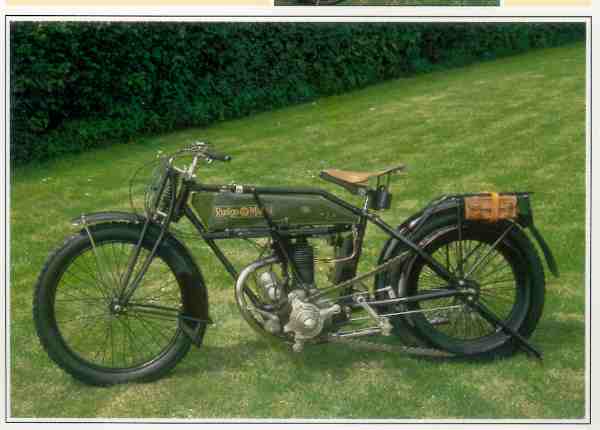 Rudge Â– already famed for its bicycles and its detachable wheels Â– was late on the motorcycle scene, but its first model, launched in 1911, made up for its late entry.

The company had carefully considered all the elements of the motorcycle. The engine had an overhead inlet valve and side exhaust, which allowed a more efficient combustion chamber shape. Starting was by a dedicated pedal gear, and the enclosed-spring girder front fork was of the very latest design. And from 1912, the famed Rudge "Multi" Â– its makers modestly talked of its "unapproachable perfection" Â– came on to the market.

At first sight, it seems foolish to call this single-cylinder machine a "Multi ," but the designation in fact referred to the ingenious infinitely-variable belt drive invented by company founder John V. Pugh. A similar system is still in use on automatic scooters and small automobiles, and involves letting the front and rear pulley faces move together and apart, thus changing the effective sizes of the pulley (and the overall gear ratio) while keeping belt tension constant. It was so effective that it remained in production until 1923. This transmission gave Rudge a tremendous edge in competition, though the 1913 Tourist Trophy was lost by just five seconds because of rider error. In 1914, Cyril Pull in rode his Rudge to victory in the Senior TT at 49.5 mph. Rudge bikes were widely used in WWI, and from 1919, the 1000cc Vtwin "Multwin" was added to the Multi range.

Because the Rudge singles were so tall, the upper frame tubes were bent sideways to accommodate them.