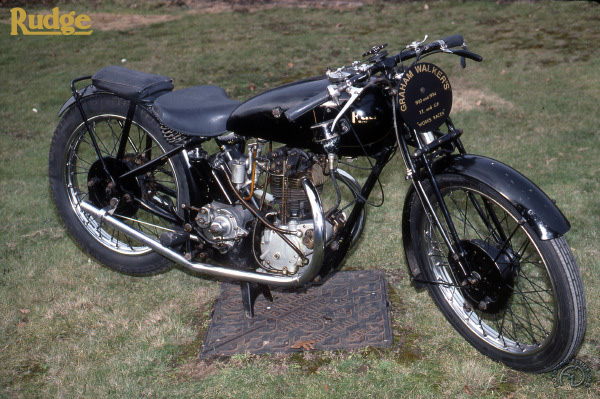 In 1868, innkeeper Dan Rudge began building "bone-shaker" velocipedes, but it was not until 1910, long after the company Dan founded had merged with Whitworth, that a prototype Rudge motorcycle with an "in-house" engine turned a wheel for the itrst time. In 1913, Ray Abbott came second in the Senior TT on a Rudge; the next year, Cyril Pullin proved Rudge's "unapproachable perfection" by winning the "Blue Ribbon of Motor Cycle Sport" - the Senior TT.

Rudge did not rest on its laurels. In 1923, it unveiled its first four-valve single. While it had the same bore and stroke as the original Rudge engine, the four-valver was extremely powerful Â– it developed 15 hp Â– and no time was lost in putting it into production.

Birth of a Legend

Rudge made an effort for TT victory in 1927, but mechanical failure sidelined the entire team. In 1928, an engine seizure eliminated the company's new sales manager Graham Walker when he was leading the TI field by two-and-a-half minutes, but he won the Ulster GP two months later at a record 80.08 mph average. In 1930, Wal Handley won the Senior TI and a new radial-valved 350 won the Junior. Not one of the radial-valve bikes had even been tried on the road before they arrived in the Isle of Man! The radial-valve head was a brilliant design by George Hack, in which transverse rockers operated by pushrods actuated by the inclined valves: it would be used on all the Rudge racers until financial problems ended the racing program.

The combination of Graham Walker as team manager and the racing four-valve Rudge was a potent one.