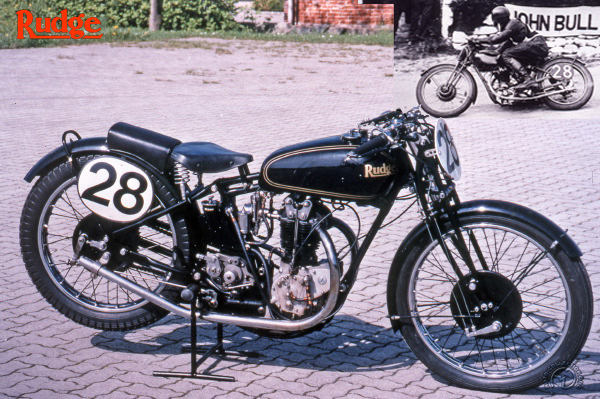 Wal Handley's win for Rudge in the 1930 Senior Tourist Trophy Ā– the marque's only 500cc victory in the Isle of Man Ā– was against all the odds because when practice began, he had no bike to ride!

Following his victories for Motosacoche in the 350 and 500cc classes in 1928, Wal had joined the Belgian FN marque as works rider. But his new overhead-cam FN, with its distinctive "pistol-grip" tank, was not ready in time for the 1930 Senior TT.

Handley was offered a ride on a privately-entered Rudge and was backed by the Rudge team, led by Graham Walker. Development engineer George Hack worked on Handley's mount overnight, and, even after some initial problems Ā– a seized gearbox (which meant that Handley actually rode Walker's reserve machine in the race), and a disagreement with a sponsor over the change of mount from FN to Rudge Ā– Wal started the race as the favorite, aided by Rudge's first-, second- and third-place victories in the Junior. Lapping in record time despite torrential rain, Handley Ā– the unofficial "works" rider Ā– finished first, over five minutes ahead of Walker, at an average of over 76 mph. The other Rudge riders finished sixth and seventh, and Rudge was awarded the team prize. Soon after, Wal Handley officially joined the Rudge team, and took third place in the 1932 Lightweight TT and second in the Junior. His 1930 Senior win was the last for an overhead-valve engine.

Wal Handley on his 500 Rudge was the first man to lap the Isle of Man TT course in under 30 minutes, despite the fact that be was riding a borrowed bike!