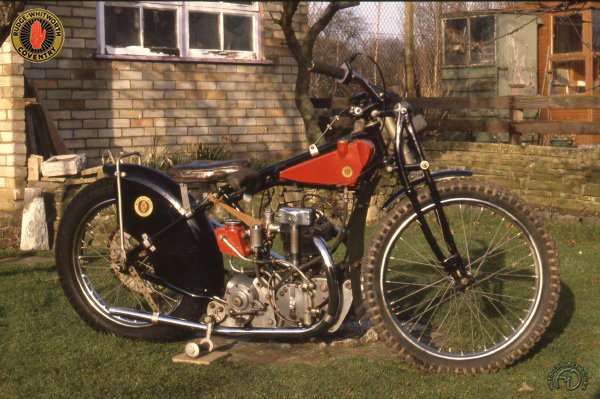 Speedway races, held on oval cinder tracks, appeared in Britain in early 1928 and enjoyed an immediate success. Within two years, speedway tracks sprang up across the country, mostly around soccer fields like those of Wembley, Stamford Bridge and Chelsea, where 80,000 fans attended a race meeting in 1929. England had never seen such rough, tough and daring motorcycle racing as this new sport from Australia.

The manufacturers responded instantly to this enthusiasm. Realizing the potential of this new market, most of the major firms quickly brought out dedicated racing models.

The first winning British machine was the Douglas flat-twin. It had the advantage of a very low center of gravity, but its in-line twin-cylinder engine forced a long wheelbase. Rudge, which dominated speed events at that time, was one of the first makers to bring out a "Special Speedway" model, in June 1928. In 1929, Rudge began to gain the upper hand to the extent that by 1930, most leading riders were Rudge-mounted. The speedway engine was of the same type, with four overhead-valves, as that used in circuit racing, but adapted to run on alcohol. The speedway tracks were so short (between 250 and 500 yards) that there was no need for a gearbox, which was replaced by a simple bevel box with a clutch. The frame was an especially lightweight unit built by Rudge, with own-make girder forks. Rudge's domination of speedway came to an end in 1931, with the appearance of JAP motorcycles, which were lighter and simpler.

The Rudge 500 was the finest speedway bike of 1930, and this restored example still competes in vintage races.