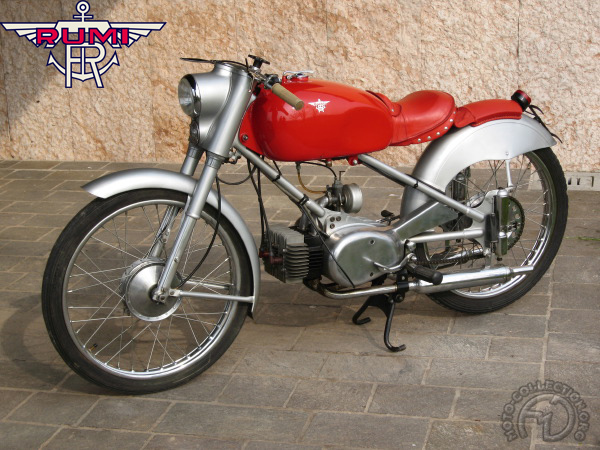 The birth of a style

Every modern sporting bike owes a debt to the Rumi 125 - this little sporting twin, with

its lively temperament, was among the most potent machines of its day and the inspiration of a whole generation of "made in Japan" sports bikes.

It was a child of its times: Postwar Italian industry - particularly in the aviation and military sectors - was getting back on its feet and attempting to provide transportation to a people impoverished by five years of war. That limited purchasing power naturally

made the industrialists concentrate on engined two-wheelers; companies such as Aermacchi, Piaggio and Rumi brought new thinking to bear on two-wheeler design, unhampered by outdated machinery and worn-out ideas.

Rumi of Bergamo had its roots in foundry work for the navy and the fabric trade. It entered the motorcycle business in 1949, using a very unusual power unit - a 125cc

twin two-stroke horizontal, which powered not only the famous ScoiattoJo and Formichino scooters but also Rumi's first production machine, a 125cc motorcycle. The 125 quickly became available in "sport" and "supersport" models, which were developed into the Rumi "Junior Gentleman" and "Junior Corsa" in the mid-Fifties. Soon after, Rumi returned to the arms trade and abandoned two-wheeler production.

This photo shows the standard Rumi "Sport"of 1953; the twin-carburetor "Supersport" developed 9 hp and could reach 75 to 80 mph, a performance equivalent to that of 205cc and 350cc bikes of the period.