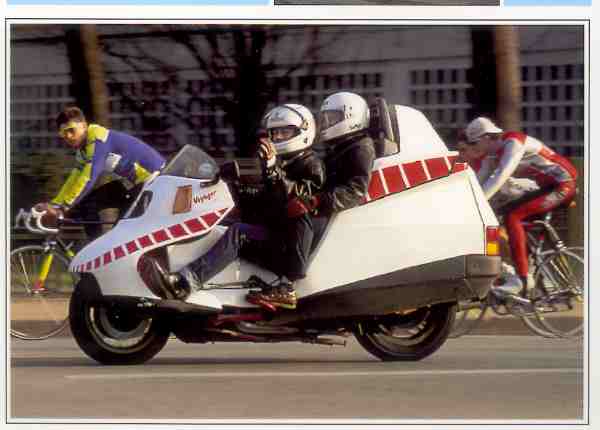 The dream of a car on two wheels

The dream of a two-wheeler that combines the compactness of a motorcycle with the comfort and weather protection of an automobile is as old as the century. The idea seems logical, nevertheless every attempt to produce such a machine has always ended in tears, usually because the limited resources of their creators have hampered the production of a fully-developed machine. That was certainly true of the British-built Voyager, the most recent attempt.

A Cocktail of Motorbike and Automobile

Royce Creasey, the designer of the Voyager, chose the engine of the curious little Reliant three-wheeler Â– born of the British vehicle taxation system, which classed three-wheeled cars under 8 cwt as motorcycles Â– linked to a Moto Guzzi gearbox and transmission. The assembly was mounted in a tubular chassis carrying a polyester bodyshell incorporating a large trunk. The rider's seatback was taken from a Volvo automobile and could be moved backwards to accommodate a passenger (who then acted as the rider's seatback).

Neither Fish nor Fowl

Economical, offering fairly good weather protection, a comfortable riding position and ample luggage capacity, the Voyager nevertheless lacked the true advantages of an automobile. Nor did it offer the benefits of a motorcycle. It was relatively heavy, cumbersome and had a lackluster power unit. Nevertheless, this bold initiative Â– which disappeared in 1991 Â– may point the way to the vehicle of a future beset by the continual increase in traffic.

With its "feet first" riding position, the British-built Voyager was one of the most recent attempts to combine the advantages of car and motorcycle.