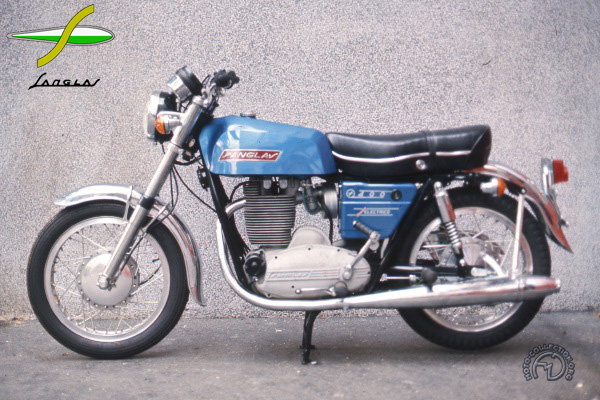 Resolutely swimming against the tide of the Spanish industry's tendency towards small capacity bikes and off-roaders, for nearly 40 years Talleres Sanglas, founded in 1942 near Barcelona, specialized in four-stroke singles. Its first 350cc machine was the basis of production right up to the disappearance of the marque, at the beginning of the Eighties.

After the launch in 1957 of a bored-out 500cc version, Sanglas attempted to widen its range. In the Sixties the firm launched a 300cc bike and - using the marque name "Rovena" - 250 and 350cc two-strokes, followed in 1964 by Zundapp-engined 50 and 100cc machines. Despite its success, production of these models ended in 1968, when Sanglas decided to concentrate on four-stroke machines.

Sanglas singles, used by the Spanish police from 1956, had an excellent reputation for reliability. In 1966 a new 400, available in three versions (one with electric start), replaced the ageing 350 and 500cc models. Its commercial success led Sanglas to launch a more sporty model, the 500S, developing 32 hp and capable of 100 mph. That was followed in 1978 by the 500S2 with alloy wheels and disk brakes. Sanglas then threw itself into a grandiose project, the ultimate expression of its obsession with the single, nothing less than the biggest single of modern times, a four-valve 747cc machine whose twin overhead camshafts were driven by a cogged belt. It was a bike which would have been ten years ahead of its time, but fate decided otherwise and Sanglas, in financial difficulties, was taken over by Yamaha.

The Sanglas vertical single was one of the most notable products of the Spanish motorcycle industry.