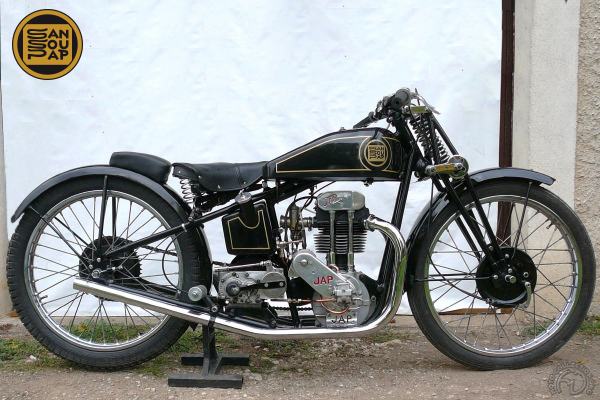 What's in a name?

The first San-Sou-Pap motorcycles, built from 1923 in the Parisian suburb of Pantin Â– and later at Colombes Â– were, as their name (which means "valveless") indicated, two-strokes of 175 and 250cc. They rapidly became famous for their performance and reliability, and in 1927 and 1929 won the famous Paris-Pyrénées-Paris rally. Inspired by these successes, San-Sou-Pap extended its range to four-strokes.

The marque's first four-strokes, in 1929, were JAP-engined 250 and 350cc machines, with side- or overhead-valve engines built by J.A. Prestwich of London. The flagship model was the racing version illustrated.

This was surpassed in 1931 by the new 350 EMSV7 with an overhead-camshaft Velocette engine (it was also 25 percent more expensive) and the EMMAGS, powered by a 500cc MAG. These models also inaugurated a new pressed-steel double-cradle frame. San-Sou-Pap did not just fit engines imported from Great Britain OAP and Velocette) and Switzerland (MAG), but also built its own power units, both two and (side-valve) four-strokes. The marque disappeared in 1936. Thanks to the tuning talents of the noble Sieur de Rovin, the San-Sou-Pap gained many sporting honors in the endurance rallies that were so popular at the time, as well as in hillclimbs Â– for which this 350 was particularly well suited. However, the marque rarely raced on the circuits.

Light, lively, and sporting, the 350 SJA was typical of its time.