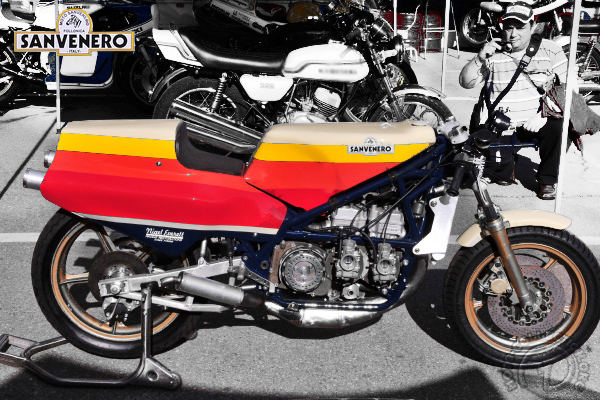 Sports enjoy an enviable status in Italy, and motorcycling has always held a special place in the heart of every Italian. The country has always boasted of its numerous little companies handbuilding motorbikes. Businesses big and small are happy to provide sponsorship for races, either as a public relations exercise or just because they enjoy being involved in all the excitement of the racing scene.

That was how it was with Sanvenero, whose 125 twin Â– first seen under this name in 1981 Â– was patterned on the Morbidelli and MBA. That was certainly logical since team boss Cecchini had previously worked on both machines. Nor were the results to be sneered at: Guy Bertin and Ricardo Tormo won a Grand Prix each and finished sixth and eighth in the World Championship.,encouraging the firm to shift into a higher gear.

The 500, unveiled in 1982, had an individual appearance. Powerful, but oversized and overweight, the Sanvenero had no chance against the four Japanese giants who were disputing the title that year. But, at the French GP, the works riders went on strike because of the condition of the track, and to everyone's surprise, the Swiss Sanvenero rider Michel Frutschi won. But that was the sole meaningful result achieved by the marque in 500cc racing. Despite the well-deserved fourth and fifth places of Bianchi and Tormo in the 125 Championship, Sanvenero was broke.

The Sanvenero's place in Grand Prix history rests on the chance victory of Michel Frutschi.