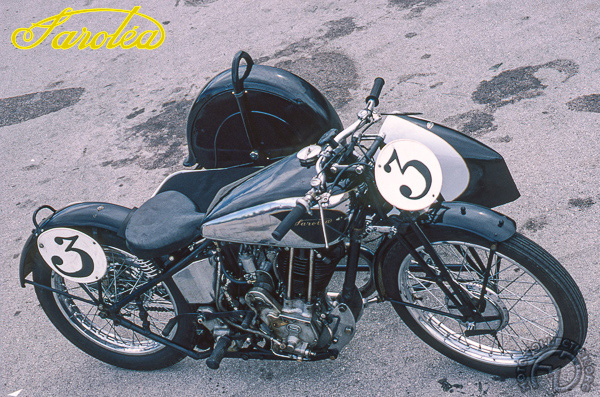 A mount for daring riders

Belgium's oldest marque produced its first motorcycle in 1901 and won the Belgian speed championship in 1902. The firm, from Herstal, near LiĂ¨ge, retained its sporting image right up to the end of production in 1960.

Late in 1923, Saroléa announced its first cataloged ohv 500, which was soon being raced with success. It was followed by many other high-performance models. Then, in 1934, came the 34 C "Monotube," also known as the "Grégoire" since it was a replica of the works racer with which Robert Grégoire had won the 1933 Belgian championship, before being killed during practice for the Belgian GP. Introduced as a 500 with an English Sturmey-Archer gearbox, from 1935 the Monotube was also available in 350 and 600cc form for sidecar racing, and fitted with an original gearbox.

Ahead of Its Time

The astounding competition record of the Monotube cannot be attributed to technical sophistication; this uncomplicated ohv single won repeated victories in the hands of noted riders of the day like Grégoire, Grizzly, Cora, Monneret, and Berthier. These wins were achieved by daring riders who made full use of the outstanding power and torque Â– and reliability Â– of the Monotube engine. Nevertheless, the gear-change was imprecise and the frame of the 350 and 500 was notorious for its lack of rigidity. Only that of the 600 was truly satisfactory, for it was joined beneath the crankcase.

This 600 Saroléa 35 C is the sole known survivor. Designed to original specifications, it is still capable of climbing the Mont Ventoux hill-climb at 50 mph and reaching 87 mph on the level.