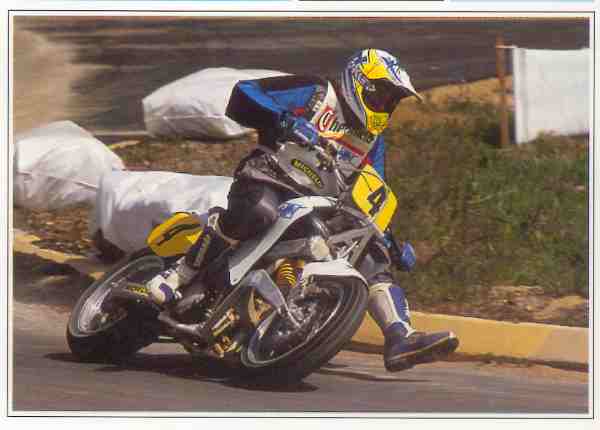 The Savard 2x2 takes its name from its inventors, the twins Franck and Patrick Savard; it was eventually renamed "Savage" in 1990. They entered a strange motorcycle with two-wheel drive in the Brittany 24 Hours TT in 1987, but this prototype only managed one lap before breaking down. It appeared several times after that, improving in reliability at every outing.

The Savard 2x2 succeeded in reaching the top of the "impossible" hill climbs and distinguished itself in Supermotard racing. In 1989, it beat Eddie Lawson, 500cc World

Speed Champion. As time went by, the Savard 2x2 continued to evolve and compete.

This astounding 2x2 Â– which vanished at the end of 1991 Â– had the outstanding merit of proving itself in real off-road competition. By separating suspension and steering, the Savard brothers managed Â– using a chain and cardan-shaft transfer mechanism Â– to power the front wheel. A special differential provided "intelligent" two-wheel drive. Power was only fed to the front wheel when the rear wheel lost traction. This revolutionary concept showed promise, but demanded such an immense amount of research and development that its advantages became less obvious. Nevertheless, it had tempting theoretical benefits Â– controlled front end geometry and improved adhesion among them Â– and obvious commercial potential.

The prototypes built by the Savard twins were constantly evolving, but their general concept gives an interesting glimpse of tomorrow's motorcycle.