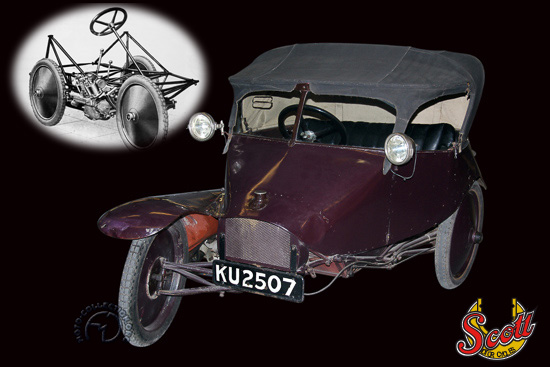 More than a sidecar

The brilliant motorcycle designer Alfred Angas Scott had conceived a motorcycle with a handlebar-mounted machine-gun as early as 1912. In 1915, the British Army held a contest for a lightweight machine-gun carriage, under the supervision of Winston Churchill. The Scott-Vickers gun-car proved too unorthodox for the War Office and the contract was awarded to the Clyno motorcycle company.

Scott's gun-car was intended to achieve a better weight distribution than was possible with a sidecar. Only one rear wheel was powered and driver and passenger sat side-by-side in a nacelle. The triangulated chassis was made up of small-diameter tubes, mostly of the same size to facilitate damage repair. Wheel steering added to the car-like appearance, but the wheel-plan was like that of a sidecar outfit and the engine was mounted as on a motorbike.

After the war was over, Scott left his motorcycle company to develop a civil version of his gun-car, which he called the "Sociable." It had bodywork in molded fiberboard reinforced with ash laths and even a rumble seat. Small-scale production started in 1920. But few Scott Sociables survive today.

This rare Scott Sociable demonstrates the curious appearance that cost this ingenious three-wheeler sales. An excessively conservative clientele thought that it resembled an automobile with a missing wheel!