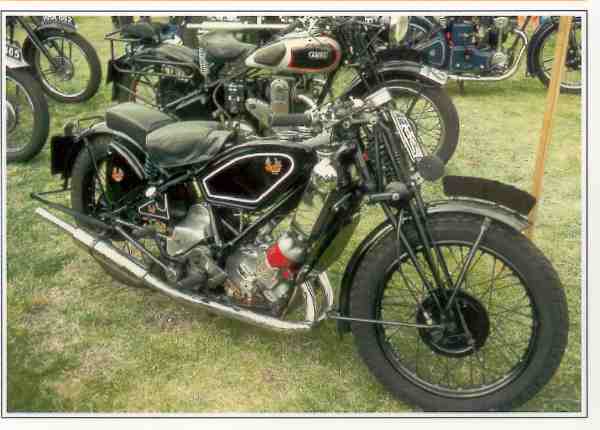 The first Scott, built in 1908, was a total revolution, from its two-stroke engine to its triangulated straight-tube frame. In 1935, some 27 years later, the new version of the legendary Flying Squirrel was again in the vanguard of technical progress; it changed little before 1939.

lf the concept was the same, the machine had developed in every respect. Above all, it gained the Power-Plus engine, whose light-alloy cylinder head had hemispherical combustion chambers with central spark plugs. No fewer than 16 studs retained the cylinder assembly. The Flying Squirrel was available as standard with a 500cc engine or in 600cc De Luxe form. The new engine's greatest asset was its extreme flexibility. The 500 developed 14 hp @ 2500 rpm and reached maximum power at 5000 rpm, while the 600, at the same engine speeds, went from 16 to 30 hp. The Scott had excellent road-holding and great reliability. The telescopic forks used during the 1920s were replaced by a girder fork assembly.

The Squirrel also had mechanical lubrication by twin adjustable oil-pumps mounted on the crankcase doors. Since 1934, Scott had been experimenting with Grand Prix bikes fitted with four-speed gearboxes and a complex mechanical lubrication system whose pump consisted of no less than 95 separate parts, operating Â– as on modern Japanese bikes Â– in proportion to engine load and throttle opening.

The Scott Flying Squirrel, with its distinctive two-stroke ''yowl, " is one of the great machines of motorcycling history.