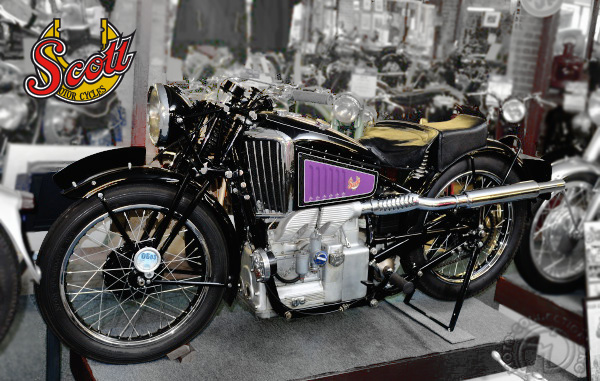 As smooth as a straight-six automobile

With the easing of the Depression in 1933, Scott once again dreamed of luxury models. William Cull created for them a formidable 747cc three-cylinder motorcycle with Elektron crankcase, three-speed gearbox and oddly a final drive by chain. This machine, which was like no other motorbike in the world, was unveiled at the 1934 London Show in a highly-modified version of 986cc with 4-speed and an extremely complex lubrication system.

Fit for a Car

The three-cylinder engine could have been made for a car, with a built-up crankshaft turning in eight roller bearings. It retained the liquid cooling and deflector-topped pistons beloved of the marque. But Scott made an innovation by using three oil pumps Â– two to lubricate the cylinders by injecting oil through eight small openings in each cylinder during the induction stroke, while the third lubricated the main bearings at high pressure.

As elegant as it was original, the Scott 3S was distinguished by a capable radiator neatly faired into the front of the tank and a splendid ribbed exhaust manifold, the sole decorative touch on the polished unit-construction engine/transmission unit. Beneath the tank, two removable panels like an automobile hood concealed the spark plugs. On the final version, the lank was a complete dummy, serving only as an instrument panel; the fuel was housed in what looked like twin toolboxes set on either side of the rear wheel. The 3S was only produced during 1936, and only eight units were made.

This surviving example of the final version of the Scott three-cylinder now has non-standard plunger rear suspension. Its frame is a U-section steel pressing.