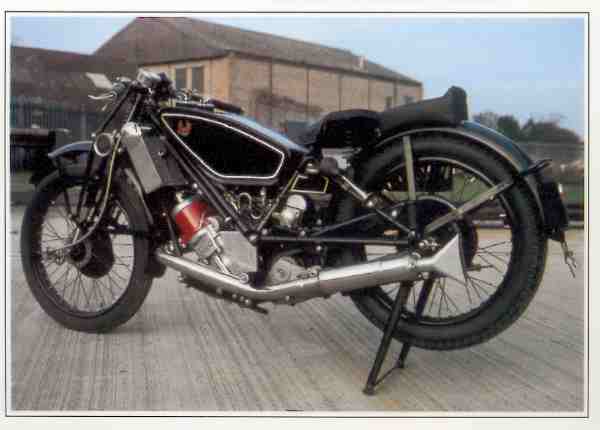 Alfred Angas Scott resigned from his company in 1919, and died prematurely at 48 years of age in 1923, but he left such a legacy of original design that the motorcycles bearing his name remained unlike any others right up to the end of production 40 years later. Scott production was never large, but its reputation was founded soundly on racing success, particularly its victories in the 1912-13 Senior Tourist Trophy races.

A Scott placed third in the 1928 Senior TT, and the works tried to make the most of this performance. The new Scotts of 1929 were lower-priced than their predecessors because of the Depression. Among the new models was the TT Replica, a copy of the 1928 racers, apart from the replacement of the straight-through tailpipe with a muffler and fishtail.

The 498cc engines had a new long-stroke layout, and there was also a 536cc model which cost extra. But compared with the Velocette KSS, Douglas 600 Sport and Norton 500 CSI, the Scott was expensive. Besides their more powerful engines, the sporty Scotts were easily recognized by their Scott telescopic front forks and the little airscoop on the front brake. The famous vertical oval-section "biscuit tin" fuel tank was replaced by a long black-enameled tank. Though there was no rear suspension, the short-wheelbase triangulated frame Â– made up entirely of straight tubes-gave exemplary roadholding plus outstanding cornering on tight bends.

The TT Replica is filled with Scott's own design of telescopic forks, while cheaper versions of the 3-speed Flying Squirrel bad Webb girder forks.