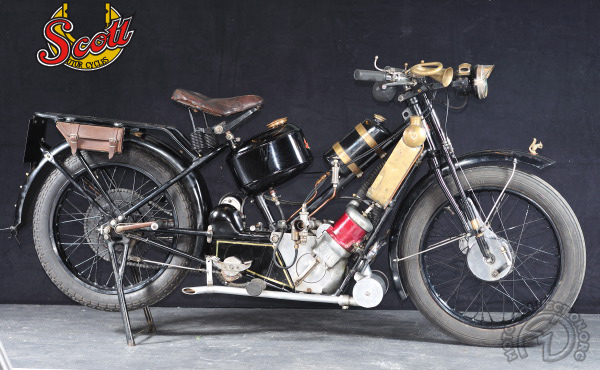 The father of the modern two-stroke

Naturally traditional and conservative in their makeup, Brits also have a strong inventive streak, and Alfred Angas Scott Â– engineer, artist, musician Â– was one of the most brilliant innovators in the history of the motorcycle.

Scott was an early advocate of the two-stroke engine, building his first power unit in 1901. Even at that early stage, the engine was a parallel twin, which he fitted to the steering head of his Premier pedal cycle so that its central flywheel drove the front wheel by friction. Later he moved the engine behind the steering head, driving the back wheel by belt and chain. In 1908, Scott patented the definitive configuration of his two-stroke motorcycle, with a triangulated frame built of straight tubes and a parallel-twin power unit with water-cooled cylinder heads.

In 1911, Scott devised a rotary valve to give better control over the induction cycle, added a proper honeycomb radiator, water-cooled cylinders, and a positive oiling system for the engine. In 1912, a Scott Â– the smallest machine entered Â– was the first-ever two-stroke to win the Isle of Man Tourist Trophy, at an average speed of 48.7 mph. Other competitors protested the win, however, saying that two-strokes were hardly sporting! That didn't prevent Scott from winning the 1913 TT, too. Sporting success was a powerful sales message, and orders flowed in so fast that Scott had to build a new factory at Shipley, Yorkshire.

This is the actual Scott Squirrel which finished third in the 1922 Isle of Man IT, ridden by Harry Langman. He covered the 226-mile course at an average of 56 mph.