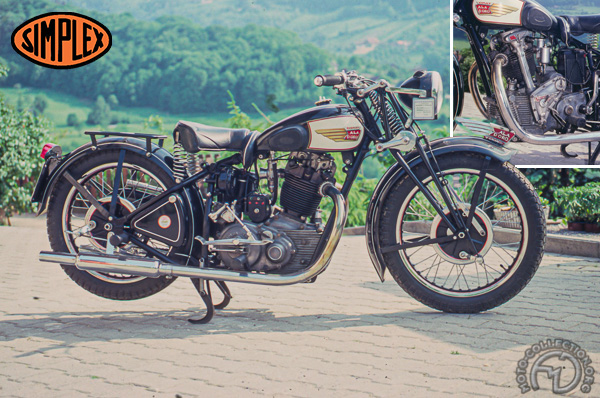 An Italian bike with German style

The Simplex marque, founded in Turin in 1922 by Pellini and Ferraris, initially just built small clip-on engines for bicycles. It was only after the departure of the Ferraris in 1924 that the firm began building complete lightweight motorcycles with 125cc horzontal two-stroke engines, which were first marketed in 1926.

Enter the Ala d'Oro

The following year the company built a 150cc four-stroke, followed in 1930 by a rather more mature 175 with enclosed valves and a three-speed transmission in unit with the engine. The layout of this "Ala d'Oro" ("Gold Wings") was adopted in 1931 for a 500 using the same name. The following year it acquired a four-speed gearbox. In 1936, there were two models in the range, a luxury line and a sports version with enhanced performance. A 250 with unorthodox rear suspension came along in 1937, as did a side-valve 500 utility model.

The final evolution of the 500, in 1938, used the same rear suspension as the 250, but rigid-frame models were still available. Relatively expensive Â– at the end of its production run, the Simplex 500 cost around 17,000 lire, equivalent to ten months of a factory handÂ’s wage or the price of a modern 1000cc sports bike Â– the Simplex enjoyed only limited sales. Technically advanced but heavily built, it combined contemporary Italian technology and Germanic styling. Simplex closed down in 1940, when Italy entered the war, but a few machines were assembled after the conflict ended, from the existing stock of spare parts.

A typical single-cylinder Italian bike of the Thirties, the Simplex was rather more severe in styling than many of its contemporaries.