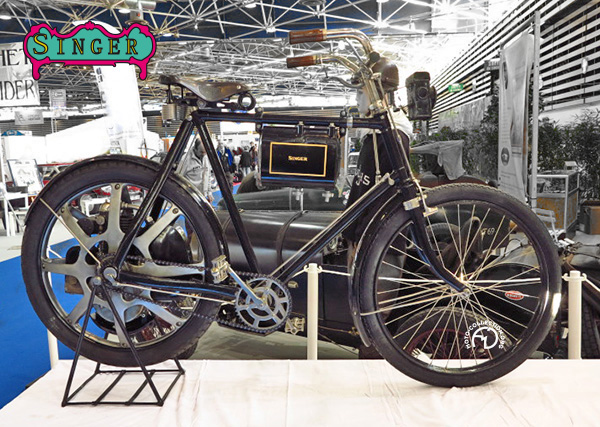 In 1898, engineer Edwin Perks started work on a "power wheel," which used a small engine mounted inside a cast and a spoked aluminium wheel (25 years ahead of Bugatti!), and he built nearly 200 before selling manufacturing rights to the Singer Cycle Company of Coventry.

Perks's design was ingenious: The 2 hp engine was mounted inside the wheel, and a spur wheel on the engine shaft drove an internally-toothed ring gear, which was riveted to the spokes. The motor wheel could be fitted between either the front or the back forks. It was the first motorcycle to be fitted with magneto ignition: A low-tension Simms-Bosch unit was mounted behind the engine, but the contact points were actually inside the cylinder.

In the original version, the fuel tank was also inside the wheel, and only held enough fuel for 60 miles: It also incorporated a surface carburetor which worked by evaporation. The only fault of the original design became apparent with time: The spur gear drive grew harsh and noisy as wear developed. In mid-1903, Singer brought out a new version of the motor wheel, in which there were spokes on only one side of the wheel, and the engine drove forward by chain to the bottom bracket of the frame and back again to the other side of the rear wheel via a freewheel. Though Singer began phasing out the motor wheel in late 1903, the idea has been revived several times since, particularly in the European cyclemotor boom of the immediate postwar period, and on the Honda P50 of the 1960s.

Transmission: chain drive from engine to bottom bracket to rear wheel, with free-wheel

The main photo shows the Singer motor wheel in its last year of production, with chain drive via the bottom bracket; the 1900 pattern (inset) had the engine enclosed within the spokes.