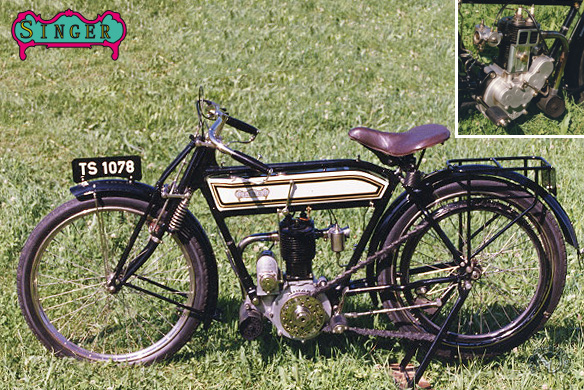 Singer was better known as a manufacturer of cars than of motorcycles. Nevertheless, the firm's origins were with two wheels, starting with bicycles. This was before it became famous in the motorcycling world for its "Motor Wheel," a cast-aluminum wheel that incorporated an engine patented by Perks & Birch that could be fitted to a bicycle frame.

In 1905, Singer began a 65 year career of car production with a bizarre 15 hp three-cylinder automobile that had 39-inch connecting rods. But historians often omit mentioning that Singer also returned to manufacturing motorcycles in 1908 with conventional machines in the same idiom as the products of Triumph and many other British marques of the time. Singer motorcycles remained in production until WWI, but only five 500 TT Roadsters exist in the 1990s.

This side-valve machine with its direct-belt Ā– there was neither clutch nor gearbox- reflects the dream of every British company in those days: success in the Isle of Man Tourist Trophy. Many companies listed a "TT replica" in their catalogues without ever having competed in the famed races, but Singer took part in both Senior (500cc) and Junior (350cc) TTs between 1911 and 1914. The company's best result was a fifth place in 1913. The Tourist Trophy model was a classic "flat-tank" design, with Druid girder forks with twin lateral-coil springs and a simple-cradle frame housing the engine Ā– a single with the unusual feature for its day of completely enclosed valve gear.

This rare Singer 7T Roadster owned by an Austrian collector is in original condition apart from the replacement of the Brown & Barlow carburetor by a Senspray unit.