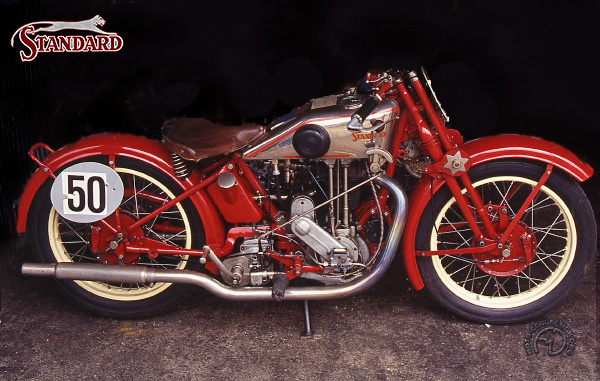 Wilhelm Gutbrod founded Standard in 1925. Production of bikes began with 350 and 500cc singles and a 750 V-twin, all JAP-engined but with own-make frames. However, Gutbrod soon abandoned the London-built engines in favor of Swiss-made MAG power units. When financial considerations made it no longer possible to obtain the Swiss engines, Standard developed its own power units.

Standard's distinguishing characteristic was its very robust Castle leading-link forks (as used by Harley-Davidson and Brough Superior), which were used on the top-of-the-line models right up to the end of Standard production in 1939. Although the first Standards with JAP engines used Burman gearboxes, when the MAG engines were adopted, the firm changed to Hurth gearboxes. The cycle part was closely based on the British HRD frame, and Standard was one of the first marques to use coupled front and rear brakes.

At Christmas 1926, ridden by Standard agent Maurer, the first Standard MAG won the ice race meeting organized at Eibsee. Then, in the 1927-1928 season, Standard invested in racing with its top riders: Dom (responsible for the development of the machines), RĂĽttchen (who later became an NSU works rider), Gall (former works rider for BMW, who did well riding Standards in 1929) and Lang (a future automobile Grand Prix champion, who was hill-climbing champion of Europe in 1929 and 1930 with Standards powered by single-overhead-cam Motosacoche engines).

This classic sports Standard is powered by a MAG engine and bas the speedometer built into the gas tank and driven from the gearbox.