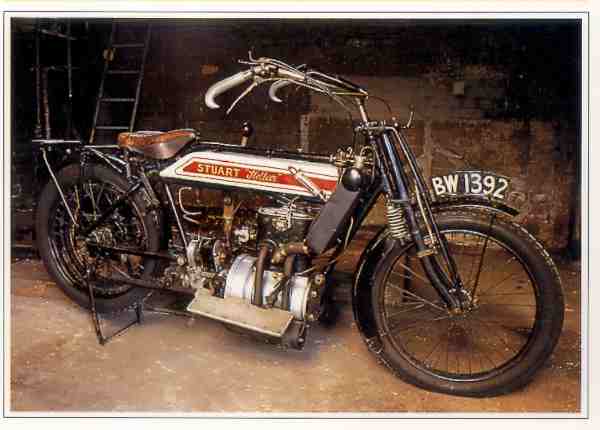 From steam to gasoline

The Stuart Turner factory in Henley-on-Thames was the first to produce small steam engines for private launches. In 1912, it staggered the motorcycle world by unveiling a large-displacement two-stroke at the time of the Olympia Motorcycle Show.

After experimenting with a 300cc two-stroke single intended to power a motorboat, the marque had decided to build a bigger gasoline engine for the motorcycle market.

The new machine was powered by a water-cooled tandem twin that drove a two-speed gearbox bolted to its rear, through a 30-plate dry clutch. Gears were shifted by the left hand, while the clutch was operated by the right foot. Final drive was by shaft and endless worm gear, and the machine was started by an automobile-type crank handle carried aboard the machine that engaged with a shaft projecting from the gearbox. The lubrication was not by a gas/ oil mixture like most two-strokes, but oil contained in a compartment in the crankcase was forced out by pressure created by the descending piston and into the upper part of the engine. The prototype (probably the only Stellar ever built) was fitted with a sidecar and used during major military maneuvers in 1913, but no orders were forthcoming, and the project was abandoned when WWI began the following year.

Famed for its steam launch engines, the Stuart Turner factory built the Stellar in 1912, but this project for a big two-stroke motorcycle never passed the prototype stage.