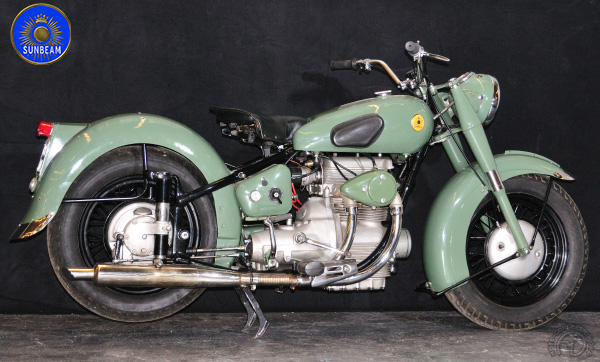 The "super-deluxe machine of all time"

After World War II, BSA bought Sunbeam from Associated Motor Cycles and hired Erling Poppe to design a "super-deluxe machine." The first all-new postwar British motorcycle, the S7 caused so much enthusiasm that, when it was launched at the London Motorcycle Show, the stand collapsed under the weight of the spectators.

The 500cc S7 went into production in 1948 in the BSA factory at Worcestershire. It was a complete departure from tradition, with a unit-constructed light-alloy tandem-twin engine with an overhead camshaft. Comfort was a prime consideration, with the front and rear suspensions augmented by large-section 4.50x16 inch balloon tires. But the S7 had a fatal flaw; its shaft final drive was incapable of transmitting the power of a planned sports version, and even the touring version overheated on a long run. Moreover, the initial production version suffered so badly from vibration that the engine had to be rubber-mounted in the frame.

Because the S7 gave the impression of being overweight, BSA quickly added a lightweight version, the 1949 S8, which had a lighter frame fitted with the front fork and wheels of the BSA A10. It was 22 lb lighter and over 6 mph faster than the S7. But sales were never very high and production of the shaft-drive vertical twins ended in 1957. The once-proud name of Sunbeam disappeared soon after.

The Sunbeam S8 so intrigued the Japanese marque that it produced a 250cc copy in the late 1950s.