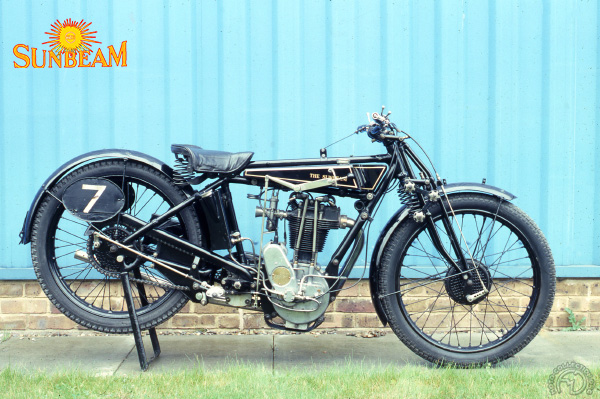 The finest British motorcycle of the 1920s

Though its production was never particularly large, in the 1920s and 1930s, Sunbeam was one of the leading marques, thanks to its outstanding record in the UK and Europe.

The first Sunbeam bike appeared in 1912. Norton, AJS and Matchless already had solid reputations, but Sunbeam succeeded in 1914 by winning the "Team Prize" in the Senior TT. It was the fastest team of three machines designed by their maker to all finish the race.

These bikes were built with the greatest precision in "Sunbeamland," Wolverhampton, by John Marston Limited, using the finest materials and the latest machine tools. In 1920, Sunbeam won the Senior TT; the following year, George Dance Â– riding one of the first prototypes with overhead-valves Â– lapped Brooklands at well over 90 mph. Four models of overhead-valve Sunbeams Â– all with single-port heads Â– were produced between 1924 and 1926: the 350cc Models 8 and 10 and the 500cc Models 9 and 11. The latter Â– known as the "Sprint" Â– was the top-of-the-range competition version. For many, it was simply the finest British motor-cycle of its day. The Sprint was designed for just one purpose Â– to win. The compression ratio could be raised by simply removing a spacer from under the cylinder barrel, there was a choice of four different sets of gear ratios and the muffler was detachable for racing. The end result was a formidable list of victories in speed and endurance contests.

The superb Sunbeam Sprint won races in Europe as well as its native Britain. In 1924 and 1926, a Sunbeam was victorious in France's most prestigious endurance race, the Bol d 'Or.