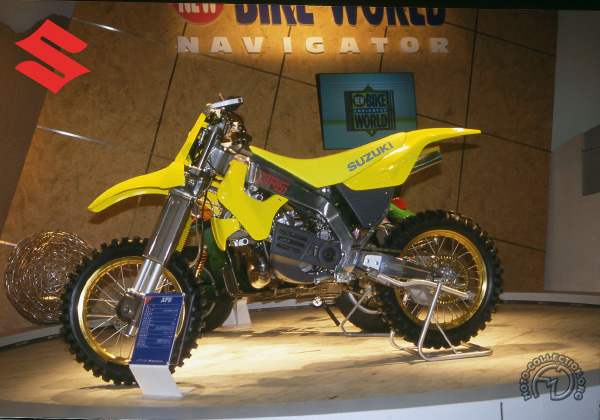 Throughout motorcycling history, two-wheeldrive motorcycles have been few and far between. However, in recent years various constructors have followed in the wake of the Savard brothers by revealing their work in this field. Suzuki alone presented three machines of this type at the 1991 Tokyo Salon.

The most interesting of them was the XF5, since its appearance was still fairly conventional and therefore ran little risk of frightening off potential customers. That's a continuing concern with constructors nowadays when advanced technology seems taken for granted bur bizarre styling can spoil a machine's chances of commercial success.

The XF 5 looks like a conventional Enduro machine, thanks to its telescopic front forks. In reality, only the right leg of the fork acts as a suspension unit. The other leg is linked to the frame by a swinging ann and houses a transmission shaft driven by a cumbersome train of three chains from the output shaft of the engine, which conveys the motion to the front hub. As on most 2x2 bikes, a one-way clutch biases the drive towards the rear wheel. Obviously such a system carries a considerable penalty in terms of unsprung weight, but despite this results so far have proved encouraging. Certainly the system seems to be capable of convincing the doubters, and on those grounds alone it should be worth watching.

Not only does the XF5 have a considerable size advantage over other two-wheel driven motorcycles, but there is nothing outlandish about its appearance.

More infos about Suzuki XF5 and many other 2-wheel-drive motorcycles in the book "Unusual motorcycles" by FranĂ§ois-Marie Dumas (Haynes ed.)