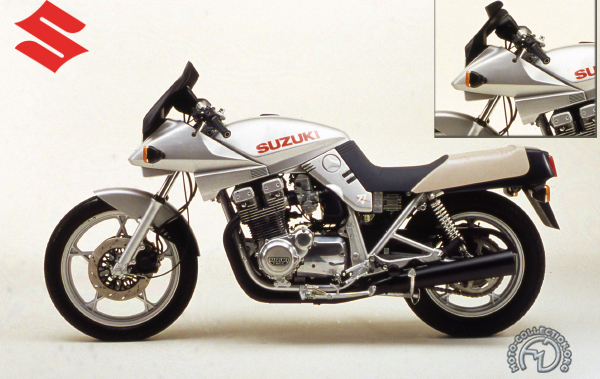 Start of a new trend

Throughout the history of the motorcycle, the stylists have attempted to create new designs, but those projects that have gone further than show exhibits have usually suffered from limited production.

The Suzuki "Katana," which appeared in prototype form in 1980, was one of the rare exceptions. Its daring lines were all the more remarkable because it came from Japan, where such excesses of style are in general frowned upon. But the 1980 motorcycle shows were the arena for many exceptional designs, marking the participation of some of the most famous designers in the creation of both prototypes and production models for the leading makers.

Suzuki exhibited the Katana 650 and 1100, both styled by Target Design, and a futuristic touring 850 designed by Giorgetto Giugiaro. MV Agusta had also used the services of Target Design for their 750 Super Sport. Yamaha showed a prototype city bike designed by Porsche, and Honda presented a CX 500 Turbo that was the work of Michelotti. The angular lines of the Katana were praised by the press but only enjoyed limited success in the showrooms, so Suzuki lost no time in "softening" its profile. The end had been achieved - the Katana had created a new style.

Named for the famous sword of the Samurai warriors, the Katana cut a trendy figure.