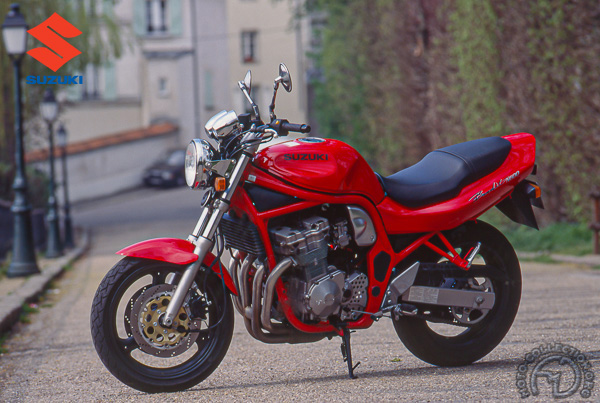 In the late Eighties, the race towards ever greater technical refinement and over equipped bikes ended and the pendulum once again swung back to simple, stripped-down machines. The Suzuki Bandit was at the forefront.

Without fenders, plastic lockers, an aluminum backbone frame or a wild color scheme, the Bandit is sober but still stylish. Initially designed solely for the Japanese market, where the most popular categories are 250 and 400cc, the Bandit proved so successful that Suzuki lost no time in trying it out on European buyers.

Even though the 400cc class is not particularly fashionable, the Bandit proved an immediate success with its pure and aggressive style. The Bandit's temperament is as individual as its style. Small and compact, it's a true sports machine that only needs a good mountain track or race track to demonstrate its abilities. The motor runs smoothly up to 14,000 rpm with a feather on the throttle, but it's necessary to make full use of the six-speed gearbox to keep the machine revving properly. Light, precise, and surefooted with its fat rear 400x17 tire, the Bandit is a grownup's toy whose price remains affordable in comparison with the competition. It's one of the few genuine sports bikes in its category.

Hundreds of concept drawings like the one shown (inset) were created before the final design for the Suzuki 400 Bandit was agreed on.Â”