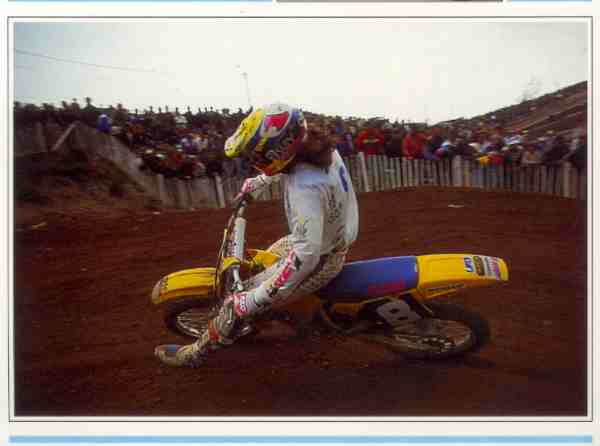 "The family of off-road bikes is a large one, where each branch is based on a very different philosophy. There are bikes suitable for use off- and on-road, trail bikes, trials bikes, enduros, scramblers, and motocross machines.

Steeplechasing with a Mechanical Horse Motocross has been called "mechanized steeplechasing." It's a more sophisticated form of the British sport of scrambling and is basically a speed trial held over a closed course. More recently, a spectacular variant called "Indoor Cross" has been developed, run on arena circuits.

The United States has long been part of the world motocross scene. The 1990 champion, Donny Schmit, was an American, riding a Suzuki 125 RM. For 1991, the production 125 RM was improved on the lines of the 1990 "works" bikes. It now falls into the class of bike that is regarded as being the most consistent, with single-disc brakes front and rear, an incredibly powerful engine, and a remarkably flexible and forgiving suspension - a must for motocross. The wheels have more than 12 inches of free movement, a remarkable figure when you consider that a road-going 125 will have about 4 inches of wheel travel! The RM Suzuki was once again the world champion's ride in 1991, though this time the honors went to France's remarkable 19-year-old rider Yves Demaria.