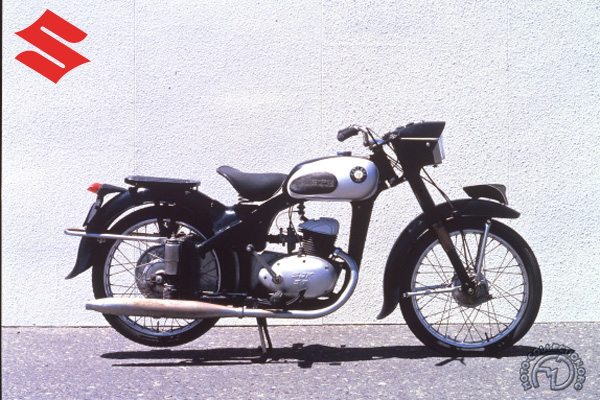 The search for an identity

The first Suzuki was built at Hamamatsu, one of the cradles of the Japanese motorcycle industry, in 1952. Curiously, the name of the marque - with its stylized "S" emblem - was not officially registered until October 1958. Up till then, Suzuki just sported its model name - the "Power Free" of 1952, then the "Diamond Free" of 1953. These two were auxiliary engines designed to be mounted on pedal cycle frames. They were followed, in 1954, by the first SJK motorcycle ("Suzuki Jidosha Kogyo" means "Suzuki Automobile Manufacture").

On the basis of its 100cc two-stroke engine, Suzuki developed, starting in 1955, the 125 STl. For a while, the engine was hardly changed, save for a 10 mm increase in stroke. The STl -like the first Yamaha and several other Japanese models of the period Ā– used the engine dimensions of the German DKW RT100. It was a legal copy by Yamaha (as part of their war reparations, the Germans had lost their copyright) and a force of inspiration for the more original SJK, which departed from the sanctioned German design, thus undoing the specter of having "borrowed" technology.

The SJK was more innovative in other respects. Its pressed steel frame marked the real entry of the marque into large-scale production. Aesthetically, it was the first attempt to establish a distinctive marque identity.

The success of this ST5 decided the fate of Suzuki, which had been a textile manufacturer since 1909 and diversified into motorcycles in 1952, becoming the Suzuki Motor Co. Ltd in 1955.