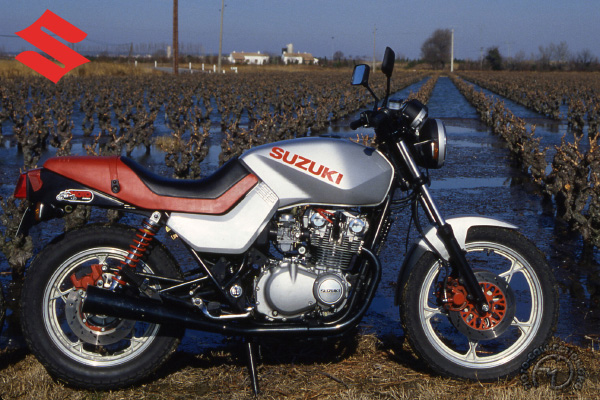 Two birds with one stone

At the 1980 Paris Salon, Suzuki made the headlines by unveiling one of the most futuristic motorcycles yet seen: the GSX 1100 Katana, a product of the talented Target design studio. It virtually overshadowed the much more sensible GS650 Katana, derived from the same styling exercise.

Nevertheless, the GS650 drew full profit from the style created by Target. In particular, it offered a very comfortable riding position, with an ultra-low saddle well-designed for both rider and passenger. Its tank, with a generous cut-out for the knees, allowed the rider to lay right down on the machine. Endowed with a highly competitive performance for its day, the GS650 offered the rare advantage of having shaft final drive, still preferred by certain diehards despite the considerable progress in chain design. In short, the Katana seemed to possess all the right plus points for a long career.

Too Strong an Image

The nuances of the market's reaction are sometimes difficult to predict, and the bike failed to live up to its early promise. The aggressive colors of the 650 GSX frightened away the traditional tourists while the sporting element turned to more extreme models. Happily, the marque had been wise enough not to put all its eggs in one basket and simultaneously launched a very similar 650 of more sober appearance plus another, cheaper model with final drive by chain.

The 650 Katana did not enjoy the success it deserved: nevertheless, it was rapid and comfortable and regarded as an excellent grand tourer.