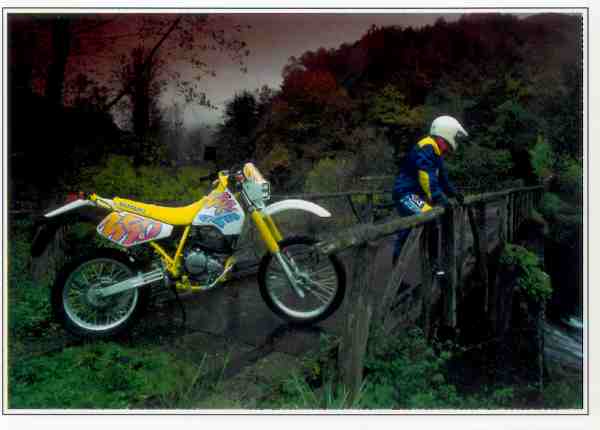 The Suzuki DR 350 was one of the most pleasant surprises of the 1990s both in the off-road category and in motorcycle production in general. It enjoyed such commercial success that it could even be classified as a "phenomenon!"

Compared with the big 650cc single cylinders, the "center of gravity" of the trail category, and unlike the capacious twincylinders with their pronounced "roadability," the DR 350 followed the opposite trend by decisively choosing the off-road option. With a wide appeal, it covered the field from yuppified trail bikes almost into the exclusive territory of enduro machines. As a bonus it carried an unbeatable sticker price that was scarcely more than that of a sophisticated 125 trail machine and half that of a 350 enduro competition four-stroke!

With 30 hp (approximately the power of an XT 500), a weight of 287 lb (though 264 lb was claimed!), a stark appeal under its easily removable homologation equipment and easy, enjoyable handling which combines the charm of a four-stroke with the pleasure of riding, the "little" DR is in no way a competition monster. But it has reassuringly and interesting potential that has encouraged a number of add-on kits and stages of tune. Because of the highly competitive pricing strategy it has been an increasingly attractive buying choice.

The DR 350 is not just a good-looker; it has infatuated enduro fans and has it.s own "Yellow Devils" trophy.