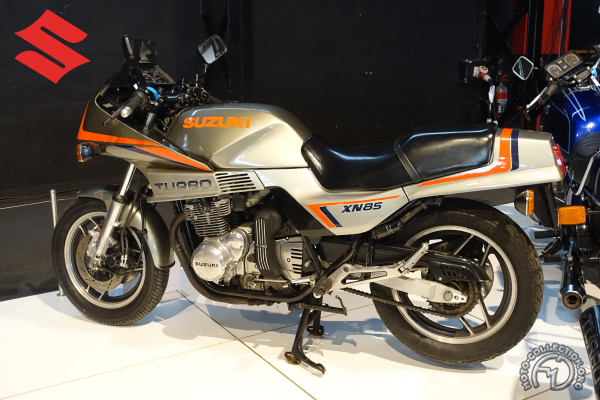 Of the Japanese Big Four, Suzuki was the most reluctant to follow the fashion for turbochargers. But there are times when commercial sense dictates that you have to follow the current trend. So, though everything was well conceived, it was with a certain lack of conviction that Suzuki set about turning a classic 650 into a turbo, starting with the addition of a Mikuni-Bosch L-Jetronic injection system.

A Far from Ideal Installation

The turbo was mounted above the gearbox; the position was poorly ventilated and a long way from the exhaust headers. This layout had little beneficial effect on the power output; the XN85 had little more performance than the normally aspirated 650, and its lackluster engine could scarcely claim to offer any sort of "turbo effect."

It was the frame that qualified the XN85 for the history books. The prototype had the benefit of an oil-tight chain case, which was dropped from me production version, but along with the Honda VF 750 F - the XN85 was the first cataloged bike with a 16-inch

front wheel. In conjunction with a frame design that was highly successful in all respects, this rescued the short career of a machine whose power unit was highly deceptive on more than one count. Shortly afterwards, this excellent handling mix reappeared on the GSX 550 and 750 E.

The XN85, still the only Suzuki bike to be fitted with fuel injection in the 90Â’s, had outstanding road-holding characteristics.