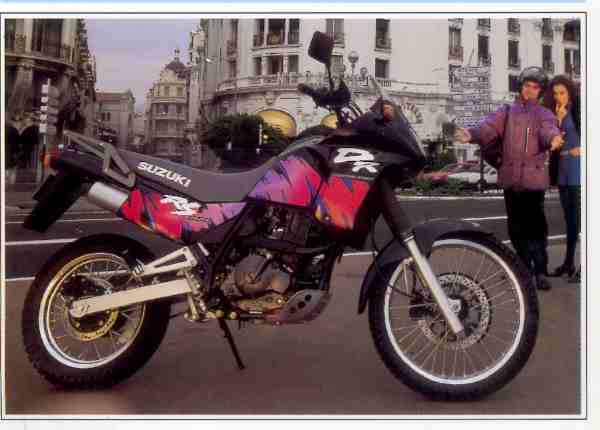 Targeted at a benchmark model

When it comes to marketing, there are two basic allitudes: create your own campaign or live off the back of someone else's. Motorcycle constructors. operating in a highly competitive enthusiasts' market, are often fatally tempted to mix these two strategies. The Suzuki DR 650 RS/E is a typical example of a model targeted directly at a rival product - and not just any old rival, but the benchmark model of the trail class!

The Honda Dominator has positioned itself as the reference for "basic" traiI bikes, now that the big trail bikes have abandoned the "African look." Its success has fatally given ideas to the competition - notably Suzuki, creaLor of a remarkable production trail bike. The DR650 RS/E is directly inspired by the Dominator: same appeal, similar steering

Little remains of the old DR 600; the 650 RS/E has a new fairing, revised frame geometry and above all, an engine that has been thoroughly reworked in order to develop greater torque. It also has an electric starter, which was lacking from the 650 RS that appeared in 1990, a major omission that was only Corrected the following year. The Suzuki DR 650 RS/E has revealed itself as an excellent performer, even if its cycle parts are reckoned less homogenous than those of its chosen rival.

Suzuki's response to the Honda Dominator, the DR650 RS/E is very much in the direct line of multi-purpose modern trail bikes.