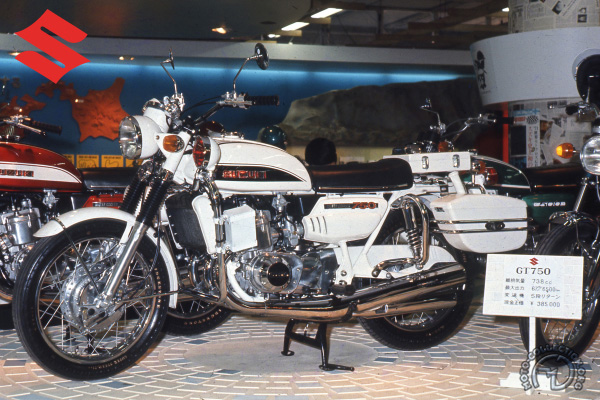 to Honda's already legendary 750 by inaugurating the new technique of transverse three-cylinder two-stroke engines. If the layout was the same, the offerings of the two rivals represented very different philosophies. The air-cooled Kawasaki H2 was a supersports machine with out-of-the-ordinary performance: over 125 mph top speed and a standing quarter in 12.1 seconds. The Suzuki was a real GT: heavier, larger and with a water-cooled engine.

Suzuki's main error lay in not having foreseen the trend of the market towards more sporting machines. A second fault was retaining a front drum brake while Honda, Kawasaki (on its 500 and 750) and Yamaha (on the 650 XS) had already opted for discs.

Built until 1977, when it appeared in the catalog alongside the 750 four-stroke, the GT took a long time to build up its image. It was small consolation that it had an excellent reputation at the end, having spawned an extraordinary track machine, the TR 750.

However, the GT was an excellent touring mount which marked a turning point in the history of the two-stroke. Reliable and mechanically silent, possessed of remarkable torque, it was a docile road bike, unlike the Kawasaki, which was brilliant but noisy and guzzled gas.

Apart from the replacement of its drum front brake by a disc, the 750 GT scarcely changed during its lifetime, except that in 1974 power output rose to 70 hp at 8500 rpm.